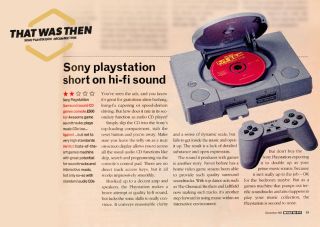 Evolution – things have to adapt to survive. That’s something we’ve tried to do over the years as the types of products we review change and our readers’ priorities shift.

We’re not perfect though, and proof of that lies in our December 1995 review of Sony’s original PlayStation.

Back then we recognized the new device’s strengths as a games console, but then proceeded to rate it solely by its abilities as a CD player.

See all our game console reviews

Usability was a concern. The controls were accessible only through an on-screen display, so a connected TV was essential. This was at the time, remember, when TVs and hi-fi did not mix for most of the population.

What rating did we give a product that was to become a dominant force in home entertainment for decades to come and a household name overnight?

One that expanded gaming to the multi-billion pound industry it is today, and spawned descendants that would go on to establish the DVD and Blu-ray formats for the masses?

We’ve learned a lot since then, as we hope our review of the PlayStation 4 Pro proves. We take a more holistic view of products now, one that takes into account the absolute ability as well as the feature-set and usability.

Performance still takes priority, but we’re flexible enough to give other aspects of the design a decent amount of pull on the verdict.

The latest PlayStation still doesn't play CDs. But it can play Blu-rays, stream audio and video across your network and, of course, play games to state-of-the-art standards. That’s worth more than two stars in anyone’s book.