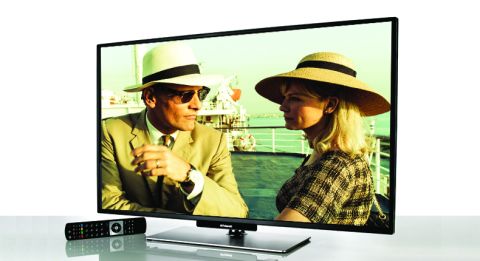 A four-star TV from the erstwhile maker of instant cameras? We’re surprised with the 5-42-LED-14, too.

Sure, the Full HD 42in screen promised us a Freeview HD tuner, passive 3D, smart features and HDMI connections for just £370 - but we didn’t expect such good performance

Turn on the Polaroid TV and the first impression is one of sharpness. Mahogany tables’ edges, tailored suits, lamp posts and cobblestone streets are etched with crisp lines in The Monuments Men Blu-ray.

The razor-sharp quality can look a little too artificial at times and rob the picture of depth, so we turn down the sharpness level until the edges stop looking so pronounced.

You can still see the wrinkles lining George Clooney’s face, however, while broadcast TV similarly shows up a clean and detailed picture when watching daytime telly.

It’s still a pleasant screen; colours are bright and vivid. We set the backlight to ‘medium’ for the best balance between dark and light elements.

But the black level on the Polaroid’s 42in screen needs to dig deeper and be more subtle with its shades and gradations. They’re deep, but could be deeper.

A stronger contrast would boost the Polaroid’s picture, and make it a more exciting watch. Compared to pricier sets, we also notice a slight loss of the finest of detail, but nothing too serious.

The natural palette making up the Stoker DVD is admirably delivered, and even with the innate dip in resolution it’s an engaging watch.

The hues are a touch overcooked, though; a pervading yellow tinge proves hard to get rid of, even with the temperature at ‘Cool’. It’s not wholly intrusive, although whites aren’t truly stark and clean.

Play The Adventures of Tintin and the passive 3D has good depth, but there’s no scope for adjusting motion, which is a shame, though the effect isn’t massively disturbing.

And you do get a generous eight pairs of passive glasses. The Polaroid TV has a relatively good sound, with weight and warmth, but no muddled thickness. Voices are easy to hear.

You’ll need a soundbase, -bar or pair of speakers for a stronger presentation, but there’s enough detail here.

The Polaroid has a sturdy, slim build and sensible design. The screen has a slim black bezel, and stands upright on a stable metal stand.

The smart interface is the black-and-gold menu that you will find on Finlux TVs. It’s basic, but easy to get around.

The Polaroid has the usual list of features and specs (BBC iPlayer, Netflix and YouTube etc) and an array of social media apps and internet radio.

It’s no WebOS, but it’s functional. The large, bulky remote can be awkward to use.

While it’s responsive and works well with the Polaroid TV, the concave design feels odd, and important buttons are too far apart.

It looks the same as the Finlux handset, too. There are three HDMI inputs, and two USB ports (one for recording); a Freeview HD tuner, ethernet, a wireless dongle and a coaxial digital output are here, too.

We’re pleasantly surprised with this Polaroid 42in. Too often we get small or supermarket brands to review that go horribly wrong, but this stands up against established brands.

And to offer this quality for just £370? It’s tempting, indeed.