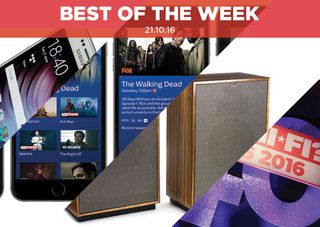 This week Samsung faced more reported instances of its smartphones exploding, Klipsch announced a limited run of its Cornwall and La Scala speakers, Sky released a mobile app for its Q service and Skylinyl offered an interesting way of recycling vinyl records.

There were fewer reviews than usual – due to some big event happening earlier this week – but there are verdicts on Parasound's Halo Integrated amplifier and ViewSonic's LightStream Pro7827HD projector to pore over.

There was also plenty of news from the What Hi-Fi? Awards, where we handed out a total of 102 awards to the year's best products. See below for a full round-up of all the winners, or visit your nearest newsagent and seek out the Awards 2016 issue.

Klipsch is celebrating its 70th year, and is marking the occasion with a limited run of its Cornwall and La Scala speakers.

Similar to the Klipschorn and Heresy run earlier this year, only 70 pairs will be made.

Sky has released a smartphone app for its Sky Q service on both Android and iOS.

The mobile app allows users to set remote recordings, stream live and on-demand programmes, as well as watch recorded shows on the device.

A new Kickstarter project promises to take damaged or unwanted vinyl records and recycle them into art.

Records will be hand-crafted into a piece of art showing a city skyline, with 55 different cities available. To get your own, head to the Skylinyl page and pledge to the project.

Has Samsung got an even bigger problem with exploding phones?

Samsung's Note 7 might not be the only phone in the Galaxy line-up to suffer from the battery-related problem which has seen a number of handsets catch fire.

According to a lawsuit filed in California, it also happened to a S6 Active model earlier this year. This battery saga is set to rumble on and on.

MORE: Has Samsung got an even bigger problem with exploding phones?

The best DACs of the year

The four best stereo amplifiers of the year

The best headphones of 2016 revealed

The best Blu-ray players of 2016 revealed

The 12 best pairs of speakers this year

The most talented turntables of 2016

The LG G5 is our smartphone of the year

Parasound has taken a different approach from the norm with its Halo Integrated amplifier. Instead of sacrificing features for sound, the company has worked hard to offer the best of both worlds.

It has resulted in an integrated amp with a fine phono stage and headphone out, plenty of useful features and a great sound. For a do-it-all amp, there are few better.

ViewSonic's LightStream projector won't necessarily rock your world, but it was never intended to do so.

This budget effort performs solidly, with a clean, stable picture and handy features. Despite lacking subtlety and refinement in its picture, it's an affordable way to get big-screen entertainment.