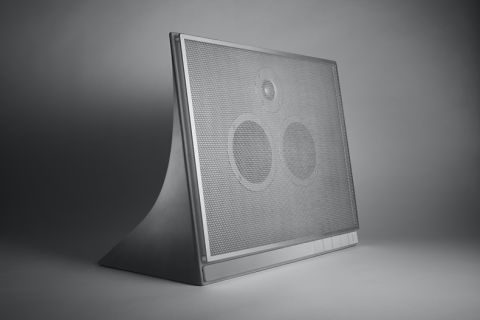 When we reported on Master & Dynamic's entry into the world of ultra-premium wireless speakers back in April, we were intrigued most of all by the MA770's provenance and by the materials it utilises. After all, not every company devises its own concrete hybrid material or partners with recently knighted architects to deliver such a bold visual statement.

MORE: Master & Dynamic's MA770 wireless speaker is made of concrete

So yes, the MA770 is made entirely of a concrete composite developed by Master & Dynamic. Because of its sculptural angles and curves, each speaker is cast in a 'soft' mould that lasts for only four or five pours before it needs to be replaced.

There's no denying it's a dramatic looker. It's slabby up front, with the tweeter and brace of 4in woven kevlar drivers huddled in the centre as if to keep each other company. Along the bottom is a strip of aluminium controls (input selection, volume and power). Further back the MA770 flows steeply downwards to form a foot and allow an exit for the bass-reflex port.

At 41 x 51 x 25 (hwd, cm) and 16kgs it's a substantial proposition. It's not quite a two-man lift, but you'll want to find the perfect spot for it quickly, rather than heaving it from position to position.

There's not much to the MA770 is this respect, but what there is has been very carefully considered.

The drivers (which are made in-house, quite a feat for a relatively small and relatively young company) are powered by 100 watts of Class D amplification.

The onboard DAC (a Wolfson/Texas Instruments item) will accept any file type of any size - although anything heftier than 24bit/96kHz will be downscaled.

Keeping the reflex port company at the back of the speaker there are digital optical and 3.5mm analogue inputs.

Google Chromecast is built in, and control is via that app - unless you use the little fascia controls, of course.

The MA770 can be used as a single stereo unit, or deployed as a pair for a truer stereo image (this latter arrangement is how we heard the MA770 during our time with it). Thanks to Chromecast, it has multi-room potential too - up to a current maximum of 16 zones.

MORE: What is Google Chromecast?

A showroom environment - even a showroom as swanky and well-appointed as Ideaworks - is never the ideal place to listen critically to a product, especially when the music being used is unfamiliar, but nevertheless a few things are obvious from our time with the MA770.

It certainly doesn't sound like a 16kg concrete speaker might be expected to. There's plenty of weight, substance and momentum to its sound, but the MA770 is just as much velvet glove as it is iron fist. It's crisply communicative at the top of the frequency range, and detailed and characterful with vocalists and the rest of the midrange.

Any and all low-frequency activity is accompanied by noticeable driver excursion. Master & Dynamic is rightly pleased to have developed and manufactured these in-house long-throw drivers, and we have formed the distinct impression that visible driver excursion is something the company wanted from the outset.

The Master & Dynamic MA770 costs £1600. This puts it up against, well, not much we've tested to be honest. Our favourite premium wireless speaker remains Naim's ground-breaking Mu-so, which costs £900.

The MA770 needs to be really very good indeed if its going to get close to justifying its price, then. And as soon as we get a sample into our testing rooms, we'll know for sure if it's worth the money. For now, though, it seems apparent there's more to the MA770 than some interesting materials and a giddy price.