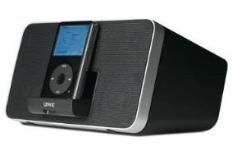 In a saturated market, Gear4 has attempted to make its Duo iPod dock stand out from the crowd. The Duo's USP is that it's not just one dock, it's two.

Pull the dock part away from the bulky main unit and it becomes a portable iPod dock that works from a rechargeable battery.

As one unit, it's fairly bulky and the sub unit feels heavy on plastic and light on style. The front half sits fairly loosely when attached to the unit, but otherwise the dock is, as promised, fairly portable.

The Duo has a remote control, the rear sub unit packs 20 watts of power, while another 18 watts of power are split across the stereo speakers.

There's also an aux line-in input for other MP3 players. In 'large' form, with both units attached and mains powered, the instantly noticeable facet of the sound is the bright treble.

Edgy listen
Cymbals and snares don't quite have us wincing, but it's certainly an edgy listen that becomes tiring. There's decent weight and punch, and vocals are open and clear, but the Gear4 Duo lacks cohesion.

Detach the dock unit and you're left with a slab of portable speaker that plays music on the move thanks to its rechargeable battery, which will play for up to eight hours at 60 per cent volume.

The portable version doesn't sound as bright and edgy as we'd feared, but it is lacking in bass and solidity.

This dock is left in no man's land, held back by its comparatively poor sound quality and high price tag. We fear the Gear4 Duo, while innovative in design, may struggle to find one home, let alone two.