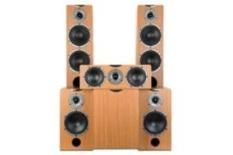 It sounds less assertive than it looks, but there’s a lot to like here

Not for French specialists Cabasse the tedium of traditional letters-and-numbers speaker model designations.

The speakers in this package are all taken from the MT30 range, sure, but their specific titles (‘Jersey' at the front, ‘Socoa' in the centre, ‘Antigua' at the rear and ‘Orion' the sub) are far more diverting than anything else.

There's less innovation about the way this MT30 system presents itself.

This is a handsome enough set-up in a bog-standard, vinyl-wrap kind of way: the rear speakers are noticeably large, the centre deeper than the norm, and the front speakers' reflex ports gape like a boy racer's exhaust pipe.

The subwoofer is tidily proportioned, though, and its downward-firing configuration helps its ‘not a speaker, more a coffee table' pretentions.

The awkwardly proportioned centre speaker is eloquent, steeping dialogue in detail both great and small, and has no trouble muscling its way to the front of the soundstage when necessary.

The MT30 set-up sounds subtler than it looks, and has greater speed and precision than the considerable capacity of its cabinets might suggest.

Effects are steered vigorously around the room, the overall presentation wanting for nothing in terms of attack.

Integration not the best
Flaws? Integration between the centre and its partners on either side is far from the smoothest class-leaders, and there's a lack of out-and-out scale to presentation that's at odds with the visual impression this system creates.

More significant is the rather soft, hazy way the Cabasse enters into and exits from low-frequency information – this relative lack of authority impacts on the overall impression of speed the MT30 5.1 otherwise fosters.

As long as you don't amplify them with similarly inclined amplification, then, the MT30 5.1 is well worth a listen – and not only because someone who loves a holiday named its speakers.