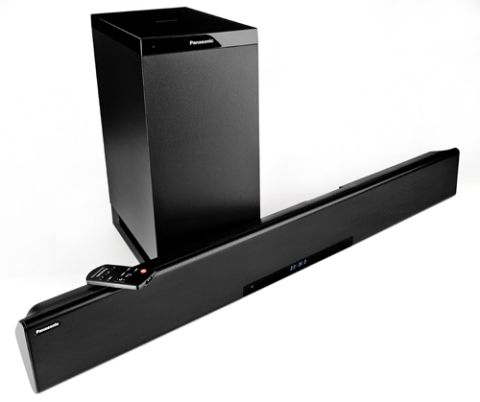 Boosts volume and bass, but not much else. Not a significant improvement on a decent-sounding TV

Panasonic has had an underwhelming run with soundbars so far, spoiling what’s otherwise a fantastic track record with home cinema gear.

Beefing up a TV’s naturally thin sound has certainly been the company’s Achilles heel. So can it make amends with its latest soundbar offering?

In short, no; But we’ll begin with the positives. The SC-HTB480 is everything you’d want underneath your TV in terms of build.

Soundbars often obscure the bottom of the screen, but this is thin and lies reasonably discreet at 5cm tall. In fact, its smart, black body proves fairly inconspicuous.

The 95cm wide bar is positioned along the front of our 47in screen, and we perch the black-box subwoofer close by for best integration.

There is good choice when it comes to connections; HDMI and optical inputs are complemented by a HDMI output.

Don’t get too excited by the USB port around the back – it’s for service only. There’s a terminal for the IR too.

You’d be hard-pushed to find a TV that it blocks, but if it does become an obstacle to your TV’s transmitter signal, the IR Blaster provided will relay it (to a Panasonic TV).

We are less taken with actually connecting the Panasonic to our Blu-ray player and TV. There is too little space around each of the inputs, making it very awkward to set up.

Bending round typically thick HDMI cables brings on a sweat and requires a bit of push and shove to make the unit sit flat with them underneath.

The frustration only continues when we use the system. The slender credit card-style remote looks cheap and feels cheap. For a £300 unit, we expect more style and substance here.

Buttons on the right of the main unit to power it on and change volume will come in handy if you misplace the remote – though, we’d imagine they would be pretty hard to access if your soundbar sits near a side wall.

A text display located on top of the 480 means you have to stand up to read it – not good if you’re slouched on the sofa.

Thankfully, pairing our Samsung Galaxy S4 to the soundbar via Bluetooth is quick thanks to its NFC (near-field communication) compatibility with Android devices.

For iOS and other users, the standard method of Bluetooth pairing is trouble-free too.

Now for the sound; again, let’s look at the positives first.

If you’re looking for a leg-up in volume from your telly, this will give you two. Its bass is clearly more powerful in comparison – though you’d hope it would be with the large subwoofer.

Play the Superman Man of Steel Blu-ray and explosions are loud and rousing. However, the problem is that the subtleties are too.

The sound feels boxed in. We don’t expect much of a surround experience at this price, but dispersion should be better.

This doesn’t cut it: if you compare a soundbar with a TV instead of another soundbar, you’re dealing with a limited product.

Its proportions may be practical, but the Panasonic’s thin stature is followed by poor sound.