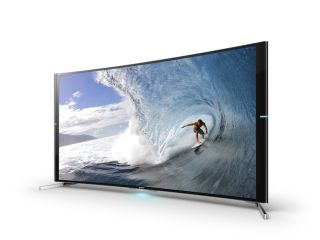 Not wanting to let Samsung and LG have all the fun, Sony has announced its first ever range of curved TVs. The S90 series boasts 4K Ultra HD resolution and is available in two screen sizes: 65in and 75in.

Features and specifications are similar to the company's KD-65X9005B flat 4K TV. It uses Sony's 4K X-Reality PRO picture engine, Triluminos colour technology and Motionflow XR800Hz, but with a couple of major differences.

There's the curve (which seems more subtle than the bend on rival Samsung and LG screens) but also that new 4.2 channel speaker system.

MORE: 4K TV reviews, news and everything you need to know

Sony gave What Hi-Fi? an exclusive look at the new TVs ahead of the official announcement, and you can see from our pictures the curve isn't quite as pronounced as you may expect. Sony wouldn't divulge the exact angle but the company claimed the S90's shallow curve means images don't appear as distorted from some angles as they do on rival curved TVs (presumably those from LG and Samsung).

We also had a quick blast of the S90's speakers and there did appear to be a slightly weightier balance compared to your average flatscreen. Those angled speakers and built-in subwoofers could make all the difference.

The fact it's based largely on the 'X9005B means the standard specification is pretty much identical. It includes a handful of HDMI and USB sockets, edge-lit LED backlighting, active 3D (two pairs of glasses are supplied) and a detachable Skype camera. You get the same One-Flick remote as its flat 4K sibling too.

Sony's first curved TVs follow in the footsteps of the LG 55EA980W and the Samsung KE55S9C, a curved OLED set. Of course the Korean manufacturers have since taken things a step further, launching bendable TVs which allow you to automaticalyly adjust the angle of the screen's curve. For now, Sony is settling for what it calls the "perfect curve" on its brand new S90 series.

Sony has yet to release information on pricing and release dates, but the Bravia S90 range, consisting of the KD-75S9005B and KD-65S9005B is expected to make an appearance at the upcoming IFA consumer electronics show in Berlin this September.