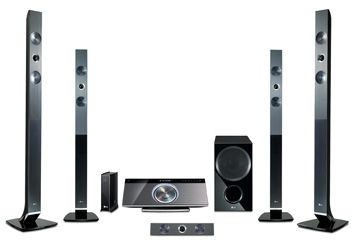 As the Best cinema system £500+ in the Awards 2011, the LG sets a high bar. But first impressions bode well: from its brushed-metal styling to its disc-playing hub, this is a gorgeous design, one which – uniquely in the test – can be wall-mounted if you wish.

Each of the four main speakers in the system can be used as shown, mounted atop tall, curved stands, but if you prefer, you can hang the speaker component directly from your wall on simple keyhole mounts. The centre channel can be installed in a similar fashion, too.

Flexible in design and functions
But it doesn’t end there. The LG’s wide, slim disc-playing ‘hub’ unit can also be wall-mounted, its smoked glass front panel motoring quietly upwards up to admit a disc when needed.

All very slick and, in a bid to eliminate cable clutter, it also supports wireless communication to the subwoofer – which provides speaker outputs to power the front three speakers – and to a smaller, separate receiver/amp that feeds the rear units.

This configuration allows for a stealthy installation, especially since the LG also supports wi-fi for its excellent Smart TV online services (including BBC iPlayer, Acetrax and Blinkbox movie platforms and all the usual social-media services).

DLNA-enabled streaming is included too, and there’s also a USB input to complete a very flexible spec. In fact, it’s an irony that one of the few wires on show is for the external iPod puck, which seems an anachronism in the AirPlay age.

Exemplary images
For all that, the LG’s true beauty lies not in its design but the persuasiveness of its picture and sound. Watching Thor in 3D, image quality is exemplary, with stable motion handling and a sure grasp of low-light details.

Colours are vibrant, (an especially welcome trait when watching in 3D), but never unnatural.

Switching to the 2D release of X-Men: First Class, the audio is every bit as impressive: it copes with the film’s bombastic final third with aplomb, powering deep, dramatic effects from each speaker with little harshness and a surprising (but welcome) sense of speaker-to-speaker cohesion and scale.

Music? There are limits to the LG’s talents, but it’s a decent enough listen, its sub only occasionally plodding where it ought to sprint.

That aside, we’ve no real complaints to make about this elegant and thoroughly capable system: it’s a real cracker.