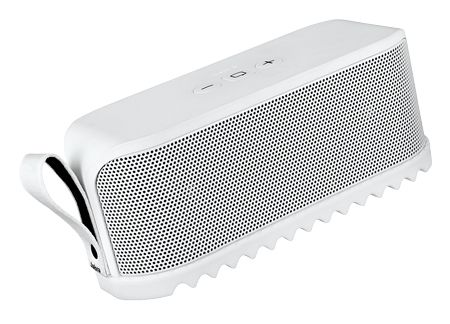 Decent enough, but for the money we'd want better sound

Jabra straddles the space between portable music speakers and more business-orientated ‘speakerphones’ and headsets, and this Solemate is a good example.

A portable Bluetooth speaker that’s good for around eight hours’ playback when fully charged via USB, it can also switch to speakerphone mode and take voice calls via its built-in mic.

As a package it’s clearly aiming to flag up its portability with a fairly rugged design, attached carry handle, bundled bag and even an integrated 3.5mm cable.

Jabra Solemate: Sound qualityThe volume of sound produced is decent: the Jabra sounds bigger than it looks and produces genuine hints of bass, but treble notes are a little bright.

Crank up the volume – don’t worry, you won’t bother the neighbours – and it starts to toughen up and lose composure.

See all our dock system reviews