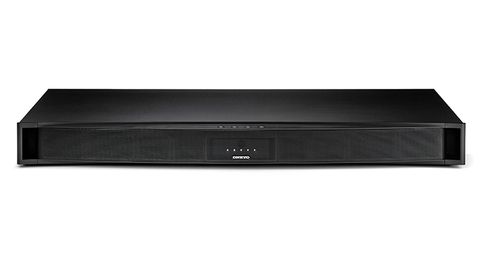 In a highly competitive market, the Onkyo fails to shine

We’re not surprised to learn Onkyo has designed its latest soundbase for the large (‘up to 70in’) or heavy (‘60kg or less’) telly. At a whopping 90cm wide and 40cm deep, you’re going to need a bigger TV rack – unless yours is already big enough to accommodate this colossal soundbase.

A few brands have honed in on the ‘big TV’ trend (Cambridge Audio and JBL to name a couple), pitching soundbases around the £300 mark – so on paper at least, the LS-T30 seems like a sensible addition to the company’s inventory.

Home cinema amplifiers have been Onkyo’s craft for years, but the company hasn’t been afraid to spread its wings in the AV world. It’s had a stab at Blu-ray players and speaker packages before taking a liking to soundbars and bases a year or two ago.

We’re yet to be convinced by its TV sound-boosters, though. The last one we listened to, the LS-T10 soundbase, we found rather disappointing. So it’s up to its big brother to win us over.

Its jumbo size will invariably limit its fan-base, but the LS-T30 is reassuringly rock-solid and finished to a good standard considering the price. And it doesn’t waste space: inside are four 6.5cm full range drivers and a 16cm down-firing subwoofer, all driven by a pair of 25W amps.

Socketry is as you’d expect. It’ll hook up to your telly through any of its single optical, coaxial and 3.5mm inputs. Bluetooth (non-aptX) also allows wireless music playback from a smartphone or tablet. Sadly, though, the USB port is only for service.

The finger-length remote control handset isn’t the most luxurious tool either, and we’d recommend taking full advantage of the unit’s ability to learn commands from (most) TV remotes.

The Onkyo isn’t short of competitors, though none should be particularly worried. Performance-wise, the LS-T30 doesn’t come close to our current favourite, the Cambridge Audio TV5 (£280).

Plunge the Onkyo straight into the action-packed Golden Gate Bridge scene in Godzilla and it’s not quite the intense, high-tension thrill ride we hoped for. Dynamically, the Onkyo struggles to communicate enough build-up in the colossal orchestral score to emphasise the drama and danger on-screen. Instead, the presentation feels a little lifeless and polite.

The LS-T30’s bass hardly has us sitting back in our seats either, lacking the power to compete with its rivals. Godzilla’s growl doesn’t go through you in the same way it does through the TV5, and we’re left wanting more rumble as he lurches out of the sea.

There’s decent weight to car collisions and tankers crunching through rails, but its talented rival has more punch and solidity – plus extra clarity and detail too.

It’s not all doom and gloom. If casual TV viewing is more your thing, you may enjoy the Onkyo. Its smooth, refined character has a maturity that makes calmer, less dramatic content easy to listen to, and it delivers enough detail in the all-important midrange.

As you’d expect, its soundfield is spacious. There’s space between objects, and a clear trajectory when they move across the screen. It pumps out the volume and would be at home in a large room.

There are four sound modes (‘stereo’, ‘surround’, ‘voice’ and ‘standard’). The mode in use is indicated by a series of lights, but you’ll need to refer to the manual to match the different light patterns to its corresponding mode. ‘Surround’ gets you a more enveloping soundfield, but midrange becomes cloudy, while ‘voice’ throws the midrange forward, coming across as shouty.

We find the default ‘standard’ the most balanced, though ‘stereo’ is better for music playback. Play Jack White’s I’m Shakin’ over Bluetooth and the delivery is balanced, relatively detailed and upbeat, the track’s distorted vocals and dense instruments sounding clear and coherent.

But despite the LS-T30 strengths, it isn’t the complete package we’d expect at this price. Everyone’s having a crack at soundbases, but only a few are getting great results.

Onkyo just isn’t one of them. Not just yet, anyway.