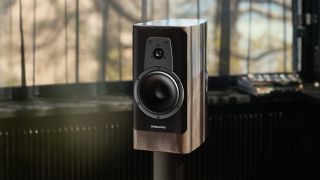 Music has the power to transport you to new worlds. A simple lyric can change the way you see the world, while a new melody can profoundly affect your mood. Of course, it can just make you nod your head, too. And there’s nothing wrong with that, as we can attest.

The new Dynaudio Contour i does all of the above, and then some. It builds on Dynaudio’s illustrious heritage to provide an entirely new listening experience, and it does so in a package that’s familiar to anyone old enough to remember vinyl the first time round.

The same but different

But hang on, you’re probably thinking. Isn’t this the Dynaudio Contour? The one that launched in 2016, building on a range that started in 1986? You know, one of the most recognisable loudspeakers in the world? Well it is and it isn’t. Because while the Contour i looks the same as the recent Contour, its insides have been completely re-engineered.

The changes are so all-encompassing it’s difficult to know where to start. The woofers have been updated with Nomex spiders for improved bass performance. There’s a new tweeter, the Esotar 2i, which comes complete with Hexis device and a larger rear chamber to reduce distortion and give a flatter frequency response. There are also updated crossovers across the board, plus new internal bracing and damping to reduce mechanical resonance (taking inspiration from Dynaudio’s flagship Confidence family). And it’s been re-tuned using the Jupiter measurement facility and experienced R&D ears. Plus the top-of-the-range Contour 60i also gets a new moulded midrange enclosure (as seen in Dynaudio’s Core pro studio monitors) and redesigned woofers. In fact, the look is about the only thing that hasn’t changed.

But while the exterior might look the same, it’s been reworked, too. The cabinets are better quality with improved construction and higher stiffness. And they come in new finishes: Black and Grey Oak in high-gloss, plus an open-wood Walnut. It’s the same speaker you know and love, but different. It’s better, not just different for the sake of it.

Remember a time when the world was analogue? Before streaming and downloads, when a stylus was a crucial part of a record player, not something you use to write on a tablet? The Dynaudio Contour i harks back to such an era, when simplicity ruled, but quality was never compromised.

This is embodied by the Contour 60i, the flagship speaker in the range. It has the improved woofer with higher sensitivity and improved midrange enclosure already mentioned, along with a bigger magnet system, a different voice-coil design and a glass-fibre voice-coil former, providing even tighter bass at higher volumes. Better warn the neighbours…

The new crossover, combined with the midrange cup and the Nomex woofer spiders means a higher crossover frequency. It now works better up to around 300Hz, meaning better performance through the midrange. Well worth £7999 a pair.

But words can’t really do it justice. To really appreciate Contour i, you’ll have to experience it for yourself. Book a demo now and take your listening up a notch.