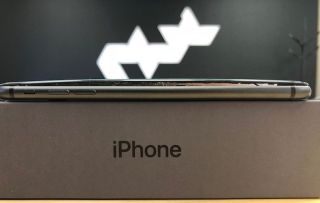 In what might diplomatically be called an "unfortunate incident" for Apple, the batteries in its newest iPhone 8 smartphone are reportedly swelling and pushing the screen out of its aluminium body.

Reports are coming in from Hong Kong, Japan, Taiwan, Canada, and Greece (pictured above, from MacRumours) - the 5.5in smartphone has in some cases been deformed and rendered unusable. What's more, because this is happening in multiple countries across the world, it seems unlikely this is simply a rogue production line issue.

According to the Guardian, an Apple spokesperson said the company is looking into the issues. Some of the phones have been collected by their operator partners for investigation, it's been reported.

But since the explosive news of the batteries in the Galaxy Note 7 in 2016, which was banned from flights after numerous melting batteries before being recalled (although Samsung eventually chanced a new one), the public's response to this malfunction might be harsher than it might otherwise have been.

Hopefully Apple will be able to fix this issue quickly, before it has a drastic impact on its sales. Nevertheless, it's not a good look for the company - and might hinder consumers' response to the iPhone X too.