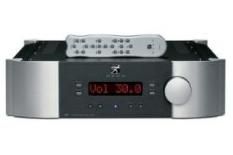 In most ways the i-7 RS is about as good as integrated amplifiers get; however, some may not like the way it trades excitement for sophistication

There can be few classier amplifiers than Moon's i-7 RS. From the well-weighted volume control to the immaculately finished casework and ultra-clear display, this is an amp that oozes luxury.

We tested the original i-7 back in July 2006. The RS mods hike the price by £500 and add improved components and general fine-tuning rather than any major rethink. The only external change is the addition of the ‘RS' tag.

This hefty amp weighs in at 25kg and delivers a useful 150-watts per channel into 8 ohms. It's the way power increases sharply to 250-watts per channel when impedance halves that really tells you that this integrated amp is a powerhouse. The RS doesn't get overly hot when pushed hard, either, making it that little bit easier to accommodate – though the weight and dimensions mean you'll have to put some thought into the equipment support.

Improved imaging and a stable sound stage
The back panel is slightly unusual, with left and right inputs, preamp outputs and speaker terminals all grouped according to channel. Other manufacturers use a dual-mono layout, where the left and right channels are separated, but few extend things this far. The advantage to this sort of layout is improved stereo imaging. Try an immaculate audiophile recording such as Opus 3's Live at Vatnajökull set and this amplifier delivers a wonderfully stable sound stage.

Unlike some of the competition, the focus doesn't suffer as the music becomes more demanding, either.

This composure extends to the presentation in general; this amp never sounds as if it's working hard. With some rivals, this kind of presentation zaps some of the music's life; not here. Play the upbeat Red Hot Chili Peppers' version of Higher Ground and the Moon has speed and agility. Detail resolution is impressive, as is the almost valve-like fluidity with which this amp delivers voices. Rarely have the Chilis sounded so natural and vibrant. You can add class-leading refinement and a high degree of transparency to the list of plus points, too. The refinement is a product of a sweet treble that refuses to add undue harshness to even the worst recordings; transparency is helped by a low noise floor and lack of overt coloration.

Punches pulled in search of sonic purity?
The RS retains all the sophistication of its predecessor while adding an extra dose of clarity. However, such is the quality of the competition that certain areas of the RS's performance are open to criticism. We'd like greater grunt at low frequencies. The amp has a slight tendency to pull its punches, and sounds a little too polite with hard-charging music – so it isn't the most exciting listen. Timing could be a tad crisper, too.

More junior models in Moon's range – the i-3 RS (£1990) for example – get these things right. Perhaps, in search of delivering the last percentage point of detail and sonic purity, Moon has engineered out some of the music's excitement. For us, the trade-off is too great, and that's what costs this otherwise outstanding amplifier a star.