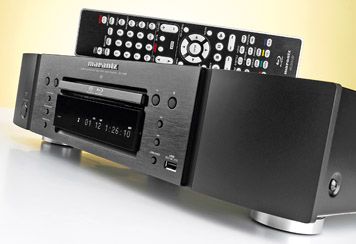 A great deck, particularly for music lovers, though its price premium is a hurdle

If the Denon DBP-2012UD sets high standards, Marantz’s UD7006 – also the recipient of a significant price cut in recent months – is just as impressive, which is no surprise given that the two players are nigh-on identical.

Certain controls are located slightly differently, but only in the name of styling consistency with other Marantz components: the guts of this player are just the same, including its Anchor Bay upscaling, Analog Devices video DAC, Burr-Brown audio DAC and key socketry.

That means the 7006 has the same strengths (and minor weaknesses) of its stablemate. It’s well-equipped with analogue outputs, so it’s easy to integrate with older home cinema kit and into hi-fi systems, but it includes only one HDMI out.

That’s a problem for prospective buyers with older amps who want to get into 3D. On the other hand, if you don’t want 3D, it won’t matter a jot.

That issue aside, we’ve few reservations about the Marantz. It’s predictably excellent with Blu-ray, most especially with a good 2D transfer such as True Grit.

The epic vistas are wonderfully vivid, with consistent, noise-free backgrounds and beautifully crisp details. The film’s stately camera pans are handled in an assured fashion, too

Good spec, but a couple of shortfalls
Like the Denon, the Marantz particularly impresses when asked to upscale DVD to 1080p. It produces dense, largely noiseless backgrounds and solid blocks of colour with Cars 2 on DVD, and keeps motion inconsistencies and shimmering edges well in check.

That’s great news if you’ve a large collection of DVDs to go with your burgeoning stock of Blu-rays.

The Marantz is just as accomplished sonically. With the Ramones’ rip-roaring Sheena Is A Punk Rocker, there’s an infectious swagger to its approach, plus a welcome injection of bassline energy, suggesting that the player has a little more sparkle in stereo than the Denon DBP-2012UD.

Switch to surround sound music and the margin of difference narrows, while movie sound, particularly when delivered via HDMI, is indistinguishable between the two players.

As we noted with the Denon, the UD7006 endows your discs with more detail, drive and scale than you’d get from a budget player, despite the fact that, in theory, your AV amplifier bears the lion’s share of the responsibility for the sounds you hear.

No online film streaming
With streaming, once again, it’s a case of ‘Okay, but must try harder’. The Marantz has no truck with online movie streaming, and it won’t handle FLAC music files, although it sounds fine with good-quality AAC and WAV content.

Overall, the UD7006 remains just as compelling as ever, not least because of its new, more competitive price.

However, unless you’re specifically interested in its slightly better sound quality with CD, there’s little to justify the Marantz’s price premium over the otherwise identical Denon.