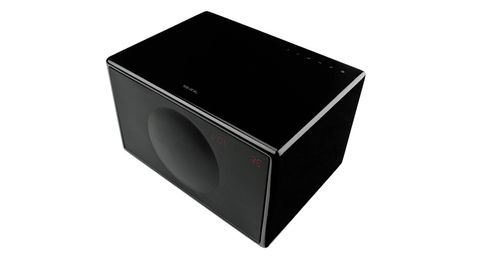 A commendable speaker if you’re mainly after Bluetooth and radio

Shed a tear for the old 30-pin iPod dock. With the arrival of Apple’s Lightning connector and the rise of wireless audio, docks are not doing so well.

One by one, we see devices taken back to the drawing board, then re-emerging sans dock.

The Geneva Model M Wireless is one – it’s an update of the Award-winning Model M. Bluetooth streaming (A2DP, not aptX) and DAB radio join the existing features: line input, FM radio and... an alarm clock.

Not exactly a wealth of features and functions, the Model M Wireless has no time for apps or multi-room nonsense. Geneva’s no-nonsense (or is that limited?) approach is reflected in the aesthetics, which are of the minimalist persuasion.

There’s barely anything to look at, but what is there looks nice. It’s a wooden cabinet, dressed in one of four finishes: piano-gloss red, black, white and a fairly traditional walnut. The top of the device has a row of soft-touch buttons. The bottom has indents, where you attach the system’s feet.

Behind the metal grille are two separate speakers, each with a 25mm tweeter and a 10cm mid/bass unit, tuned with a front-venting reflex port and driven actively using four channels of Class D amplification.

Oh, and let’s not forget the LED display in the corner, telling time/mode/station. It’s easy to operate, although we find ourselves often touching the wrong, soft-touch buttons. The proper (slab-type) remote, however, has everything you need.

Without AirPlay, there’s no faffing about with network configuration.

Onwards to sound, and for the most part we like what we hear. There’s good power, with the unit capable of going loud with ease and composure. It’s a full-bodied sound: vocals and instruments have weight behind them.

The soundstage is also taller and wider than we would expect from the size of the box, and there’s a good sense of rhythm too. It’s not all good news though. The sound isn’t as clear as we’d like.

The delivery feels a little closed-in, slightly muffled. It’s not a deal-breaker, but those seeking ultimate clarity should be wary. The radio performance is good.

After connecting the bundled aerial at the back of the device, we tuned LBC 97.3 and found the current affairs chatter sharp and clear. We switch over to DAB and, as we would expect, the sound is cleaner and less noisy.

The Model M is a good purchase if you only have a few connections in mind, and if you’re after a radio too. We like the look and the build.

But for the price, we can’t help feel the features are on the limited side. That would be okay if the sound was seriously impressive. As it is, the sound is strong – but we’ve heard better for the same money or less.