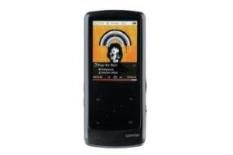 We almost fell off our collective chair in excitement as we got to grips with the Cowon iAudio 9.

For not only has Cowon tried something a little bit different in its attempt to match Apple's intuitive interface, but the company has absolutely nailed it.

The iAudio 9, better known as the i9, features a capacitive touchscreen, meaning it doesn't require prodding to move the screen. Instead it responds to human touch, allowing you to slide and stroke your way around.

The pad at the bottom of the svelte i9 offers a diagonal control that enables you to swipe through the menus. It's a novel function that works brilliantly, responding when it should do and to the correct degree.

The ability to record
What's more, if you'd rather tap your way up and down, you can do that, too: the best of both worlds, then.

The effectiveness of the slide and tap functionality makes it all the more galling that Cowon has chosen to clutter this clean palette with a fiddly menu button on one side and volume buttons on the other. Still, we can just about get our hands round it.

This is the 8GB model of the i9 (£20 more will you get the 16GB version) and as well as music and video you'll find an FM radio, complete with the ability to record, and a tinny speaker should you wish to scare any grannies on the bus.

File compatibility is decent, with support for MP3, WMA, FLAC and WAV files, as well as WMV and AVI videos. In addition, there's a whopping 29 hours of battery for audio.

Resolution is an issue
The two-inch, 320 x 240 screen is reasonable, but it's a shame that the Cowon will only take video of this resolution or smaller – the need to resize videos is an unwanted chore compared with its rivals.

All your transferring (but not resizing) can be done via Windows Media Player, or by simply dragging and dropping content.

So how does it perform? Well, video looks bright and vivid, but a little lurid with some hues, and the level of insight is bettered elsewhere.

Sonically, there's not the dynamic sparkle of the best portable media players and tunes can sound a little cluttered when pushed, too.

The Cowon is by no means a bad player, but why buy one? Unless you're strictly limited to £100 or have an Apple-aversion, you can do better.