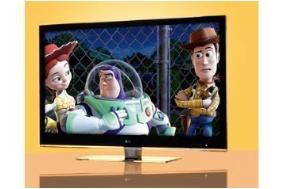 As brilliant in action as it is on paper, this is the best LG TV we’ve yet seen

The problem with direct LED backlighting (aka full array), is that it can add loads of depth to a flatscreen.

Not here. LG has managed to cram a full panel of locally dimming LED backlights into a chassis measuring just 3.5cm in depth.

Smart looks and performance
It's a nice-looking screen, with its seamless frame and touch-sensitive buttons that light sequentially when you press the on button.

Throw in menus with big, colourful icons and you've got a unit that's nice to look at whatever you're doing.

Looking at menus, though, will only distract you for a while – if at all. You'll soon be sending the '8900 a Blu-ray picture. And this is where it starts to impress.

Pop in Inglourious Basterds and the LED backlighting quickly proves its value by showing the opening titles with bright white text and an inky black background.

And it soon becomes clear this LG offers one of the most neutral and consistent colour palettes around – the mountains are vibrant and organic, while skin tones have vitality without ever being ruddy.

Close-up shots prove the LG is also right at the top of the pile for overall definition. It revels in retrieving the finest details and imperfections, and, while the TruMotion 200Hz processing isn't quite as impressive as that of its leading peers, it's only a smidge behind.

Continuing to impress
Switch to Precious on DVD and the LG continues to impress, offering up one of the sharpest and most detailed upscaled pictures we've seen for a good while.

It looks a little richer in its colour balance here compared to its Blu-ray performance. However, although this means it's not quite neutral, it does stop short of looking overblown, so proves to be a very minor niggle.

And if you want to watch actual TV, the '8900 demonstrates impressive stability and detail, even with poor quality broadcasts, while BBC HD looks absolutely stunning. (We'd turn the motion processor off for Freeview.)

The only fly in the ointment is the sound – which is lightweight and indirect, even by flatscreen standards. For those who use separate speakers, though, the LG is a superb choice.