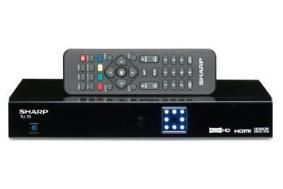 The snappily titled TU-T2 is a relatively small, space-saving unit. Build quality is distinctly average, but that's the norm for products such as these.

The front of the unit is illuminated by a bright, neon blue square that blinks in time with commands from the remote control, which is easy enough to operate.

Being just a set-top-box, there's no built in hard-disk drive. What you do get are HDMI, RGB scart and optical digital outputs.

The Sharp's on-screen menus are clear and colourful but the user experience isn't as slick as it is with the likes of the Humax HD-FOX T2.

A little menu-digging required
With TV broadcasts, you can't totally bypass the internal video processing, so standard definition 576i images are automatically deinterlaced to 576p in the box.

This means you'll have to go into the menus to switch to 1080i for high-definition broadcasts.

Still, the Sharp produces a picture broadly comparable with the class-leading Humax.

Watch the BBC HD preview and there's plenty of detail. Edge definition is excellent, with only very slight motion judder. Even with standard-def, the Sharp sends out colourful, detailed images.

With sound, though, while it sends a Dolby Digital 5.1 signal via the optical out, there's a hardness on dialogue and high frequencies.

There's a lot to be said for this Sharp's images, then; but, unfortunately, any thoughts of a five-star rating are dashed by the sound quality issues and a couple of operational foibles.