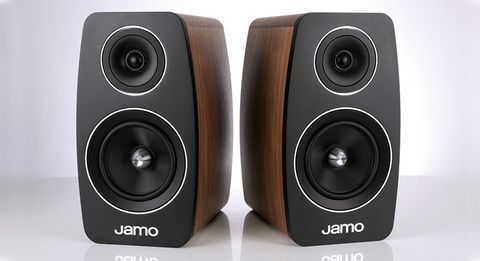 Competition is stiff, but the C103s deserve consideration

Like a nightclub bouncer in a tailor-made suit, the Jamo C103s are really packed in there. Each cabinet is big and burly, with a power-bulge around the 18cm mid/bass driver and a lot of overall presence.

If ever a speaker looked like it wasn’t to be trifled with, the Jamo C103 is it.

There are three finishes: gloss black, gloss white and the walnut veneer of our review pair, and they are smooth and high-quality, but they give the impression of barely containing the latent threat inside.

Above the driver is a 25mm silk dome tweeter, decoupled and waveguide-equipped. Around the back there are hefty biwire cable terminals and a gaping reflex port big enough for other, more modestly sized, speakers to hide in.

In between, the walnut veneer is expertly applied around the vaguely pear-shaped cabinet exterior. Chrome-effect accents around each driver add a little more visual pizzazz.

Integrated directly into our reference system, the C103s sound diffused (a little) and hard (a lot). All speakers benefit from an extended running-in period though, and after 72 hours of uninterrupted playing, the C103s are singing with their authentic voice.

Initial impressions are of a large-scale, open sound. Given a WAV file of The Flaming Lips’ Waitin’ For A Superman to deal with, the Jamos reproduction is wide and tall, with an even-handed approach to the frequency range from top to bottom.

The top end is absolutely as assertive as it wants to be, but we reckon careful system matching is required to make sure the C103s don’t overplay their hand where treble sounds are concerned.

The midrange is decently detailed, although perhaps lacking a little substance, and the low frequencies are speedy and tonally varied.

However, they aren’t as out-and-out punchy as the look of the Jamos initially leads us to expect. If they are indeed a nightclub bouncer, the C103s are altogether politer and more reasonable than is perhaps usual.

Timing is decent and dynamic range is more than adequate. Overall, the Jamos are an organised, if somewhat reticent, listen.

We back the C103s closer to the rear wall of our listening room and switch to another WAV file, this time Mos Def’s Hip Hop, and while there’s a noticeable increase in bottom-end muscle, it’s not disproportionate.

A bigger improvement is realised by biwiring them. Many biwireable speakers exhibit pretty subtle changes when biwired, but the Jamos improve decisively.

There’s no fundamental change to the Jamos’ tonal balance – it remains on the lean side of neutral – but the C103s are a better, more convincing listen this way.

There are a couple of extremely strong standmounting contenders at this sort of price, but clearly the C103s are a diverting option.

They have the looks and finish to justify their pricetag, they are unfussy about room position (although they’re big boys to start with, which limits your options a little) and are a detailed, energetic and pleasingly subtle listen.

With a bit more overall substance to their sound and a tweeter on less of a knife-edge they could really go places.

Read our Jamo news and reviews