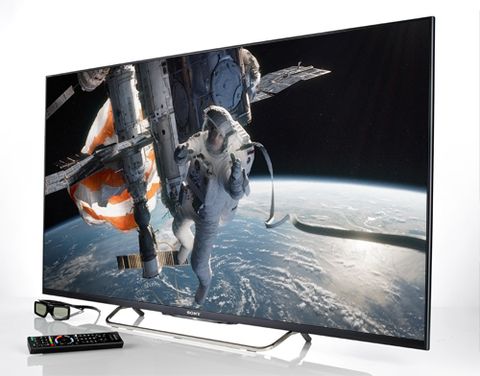 It may have lost a star, but this 50in Sony is still worth an audition

The Sony KDL-50W829B was the first 2014 TV we laid eyes on, and the natural detail and colours on its Full HD screen impressed us right away.

It's a good looking set, too, with a wafer thin bezel making it look surprisingly small for a 50in screen – and at just £900, too.

But we've seen other TVs since, and this Sony has stiff competition.

If first impressions were all it took, this Sony would be a winner the second we unboxed it. Sleek and slender with its metal edges, slim stand and subtly glowing logo, this is a smart-looking set.

The barely-there bezel surrounding the edge-lit-LED LCD screen makes the set look a lot smaller than its 50 inches, but we like that the focus is all on the screen.

It’s a sturdily built and stable set and, at 14kg, quite light too.

You can get this Sony TV in a different finish as well. The Sony KDL-50W815B has a silver bezel instead of a black one, and aside from that it's identical to the 50W829B in every other aspect.

Good looks are more than welcome, but it’s with picture quality that the KDL-50W829B really earns its stripes. It has a smooth, clear and detailed picture.

The highlight is a well judged colour balance that looks natural and realistic, especially with skin tones, although newer rivals are now better in this regard.

Black levels are impressively dark for an LCD set, and subtle too, although the clean whites could have a touch more punch.

Play a Blu-ray of Rush, and the Sony’s picture is crisp without looking unnaturally sharp.

It digs up layers of detail, with rich and vibrant hues going hand-in-hand with subtle gradations of colour.

The glossy reds of the F1 cars, the clear blue skies over the circuit, the blacks and greys of the worn-down tyres and machinery – even accounting for the 70s filter, it’s a subtle and exciting picture.

Poor viewing angles were a big issue with some Sony screens last year, but the 50W829B’s picture shows fewer signs of fading when seen from an angle.

The picture remains bright and punchy, and black levels don’t go grey at the slightest hint of off-axis viewing.

Those deep black levels don’t sacrifice too much detail, either – we found them proficient enough to be compared to our current favourite 50in screen, the Panasonic TX-P50GT60B.

These benefits remain for standard-definition broadcast channels and DVDs.

The natural hues in the film Stoker are conveyed beautifully, although that discrepancy with white levels is a touch more apparent.

However, the Sony's picture looks slightly subdued next to the new Samsung UE48H6400 – the Samsung's 48in screen is just that bit sharper around the edges, more proficient when it comes to rendering vivid reds and skin tones.

It’s worth taking time to set up the Sony’s picture, preferably armed with a THX Optimizer disc.

We’d advise turning all noise filters and processing modes off when first setting up the screen, and then tweaking as and when you see fit.

Setting noise reduction to low and playing with the ‘Reality Creation’ setting is as far as we got before we found we were messing with the Sony’s naturally brilliant screen too much.

There are a couple of scene modes to experiment with, the ‘Cinema’ mode (MotionFlow set to ‘TrueCinema’, Film Mode on ‘Auto’, surround sound on) proving to be the best effect while retaining a natural look.

It adds a touch of warmth, boosting the punch of white areas, and the picture looks glossy and smooth with Blu-ray films.

This 50W829B is an active 3D set, and Sony has helpfully included two pairs of active 3D glasses in the box.

With stunning space drama Gravity on Blu-ray 3D, the picture remains bright and punchy, all the while delivering convincing blacks and good detail despite the expected dimming.

There’s a hint of image instability at times, but overall the motion remains decent, and there’s a dramatic sense of depth to the picture.

While it’s not immediately taxing on the eyes (the glasses fit well and are comfortable), we did find our eyes getting weary over time.

Of course, personal preferences for active or passive (or even 3D at all) will prevail, but for those that want it, Sony’s active 3D is worth pursuing.

The 50W829B doesn’t have the higher series’ Wedge design that allows for larger speakers, but it still sounds pretty decent.

The presentation is fairly smooth and clean, and is a more rounded, weighty affair than the harsh, tinny sound we’ve come to loathe on flatscreen TVs.

We found the Sony TV’s speakers perfectly acceptable to listen to when watching Freeview channels, although the voices could be a little more distinct and direct.

Turning the Sound Booster on brings voices forward, but it also makes the sound a little boomy.

The auto surround option does attempt to create a sense of surround sound, and Sony has the unusual offer of an external wireless subwoofer that can be set up with a USB dongle.

If you want an involving cinema experience though, we would advise you to invest in a soundbar or soundbase, if not a full 5.1 surround speaker package.

Around the back of the set are four HDMI inputs to connect all your sources, with ARC (Audio Return Channel) and MHL (Mobile High-definition Link) compatibility.

Broadcast TV is catered for via the Freeview HD tuner, and a satellite tuner (which isn’t Freesat, but does receive some satellite channels). Auto tuning all the channels is swiftly done.

Sony’s smart TV portal has had a design overhaul, and the new slick and mature-looking interface on the 50W829B is far simpler and more intuitive to use than before.

There’s no flashiness or clunkiness – it’s a great design.

Sony’s Music and Video Unlimited services are found in separate Music and Movies tabs, where you can preview 30 seconds of a song or watch a film trailer before buying.

There’s a decent selection of apps in the My Apps panel, including BBC iPlayer, Demand 5 (no ITV Player or 4oD yet), Amazon Instant/LoveFilm, YouTube and Netflix.

As long as your network connection is steady, watching on-demand content is a breeze on the 50W829B.

It’s worth keeping in mind that the Sony’s picture settings will automatically change when watching online content (whether iPlayer or YouTube) to smooth out the noise and motion issues that inevitably crop up when watching streamed content.

With its ‘Discover’ feature Sony TV also recommends shows that you might like. We’ve seen this feature yield less-than-impressive results on Samsung’s TVs last year, but it works rather nicely on the Sony 50W829B.

The TV learns your preferences as you keep watching, and you can also set a keyword (or a show’s name), which the TV will search for across Freeview and on-demand services.

It’s worth checking the Channel tab and using the ‘Discover’ button on the remote to see how the service evolves – we found it did pull up good suggestions based on the channels we were watching the most.

At first glance, the Sony 50W829B’s remote control looks unchanged, but there have been some subtle tweaks.

The significant ones are the ‘Home’, ‘Discover’, ‘SEN’ and ‘Netflix’ buttons surrounding the central buttons, which respectively offer easy access to the smart TV portal, recommended shows, the apps section, and Netflix.

The remote is responsive and nice to use.

Sony’s new One-Flick smart touch remote (with NFC-sharing) also works with this set, but it isn’t included in the box.

While we’re more likely to use the remote for changing volume and channels, Sony’s TV SideView control app (free for iOS and Android) is worth downloading for the useful electronic programme guide.

It lets you browse and select programmes on your smart device instead of pulling up the screen-hogging EPG on the 50W829B. The app itself has had a lick of paint since we last encountered it.

It looks smarter, with the remote section logical and easy to use.

What else can you do with the app? Get show and cast information, set recording times, change inputs, select on-demand services, and even get suggestions for related content.

It’s nice to use, especially when viewed on a tablet’s larger screen (smartphone view is restrictive).

Among the innovations here is the ‘Live Football Mode’, which enhances the noise of the crowd to recreate the atmosphere of being in the stadium.

It does give a certain ambience, but the crowd noise is rather, well, noisy.

As well as activating surround sound, this setting switches the picture to ‘Sport’ mode, which means cranking up the contrast and motion processing until the picture looks rather too artificial.

The button also pulls up football-related videos from YouTube and a FIFA archive – a nice tie-in for the forthcoming World Cup.

‘Social View’ activates a ticker-tape Twitter feed at the bottom of the TV screen that displays multiple tweets relating to any keyword set, from ‘Oscars’ to ‘science’.

It’s one of the nicer Twitter integrations we’ve seen on a TV screen, and could be a fun feature if you like keeping up to date with all the gossip when watching live TV.

On the network side of things, you have the choice of wired or built-in wi-fi connections. Both are easy to set up, with the wi-fi being useful if your router is far from the TV.

Otherwise, we’d make use of the ethernet port and go down the more stable wired route. The Sony is DLNA certified as well, so you can access media content from any connected laptop or smart device.

There’s also scope for making Skype calls, but you’ll have to buy the camera separately.

This screen represents a welcome return to form for Sony, which seems to have swept aside most of last year’s troubling issues to present a confident picture that’s good to watch.

Overall though, the KDL-50W829B is no longer at the top of the pile with its most talented rivals offering better performance – hence the drop in star rating – but we're still fond of it, and it remains a pretty compelling watch.