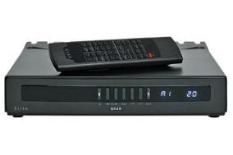 It's easy to overlook Quad's new Elite range. Despite the changed name, these products look pretty much like those from the old 99 series, which in turn weren't much different from the 77 series of the early '90s.

The real changes are on the inside, where both pre and power amps benefit from improved circuit layouts and better quality of components. The story, then, is very much that of evolving a competent design rather than starting afresh.

A capable, well-specified pairing
The preamp is a fully featured unit. It has a fine MM/MC phono stage with built-in sensitivity adjustments that can be changed from the remote control, and a Tilt tone control that adjusts the tonal balance pivoted around the midrange.

The latter works subtly and would prove useful in a less than perfect room. The 80-Watt per channel Elite Stereo power amplifier is as simple as this type of product normally is, bar the option of Quad's proprietary signal connections.

And this pre/power pair is a capable performer. The two-box holds true to Quad traditions by delivering an impressively neutral tonal balance.

The presentation is carefully designed to tread the middle path between laid-back and forward and so works as well with Eminem's latest album Recovery, as it does Prokofiev's stirring Romeo & Juliet.

Yet, the performance isn't flawless. Next to the class leaders, this pairing lacks a little dynamic expression and punch. More scale and authority wouldn't go amiss, either.

Proprietary cable problem
We have other things to complain about. Quad encourages owners to stack these products. It even provides proprietary cables for signal, control and mains to make things neat as possible.

However, use the components this way and performance takes a notable dip in terms of detail and transparency. Also, the remote is poorly laid out and the display on the preamp is limited.

Despite all that, we shouldn't forget this pair gets many things right sonically, and that no alternative can better its feature count. So, while this duo doesn't blow us away, we still think it's worth a serious look.