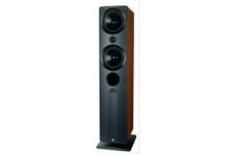 Big, bold and with a budget price tag, the Q Acoustics lack a little in detail and attack, but make up for it with scale and balance

As regular readers will know, we're big fans of the Q Acoustics range of speakers. It was created with one aim in mind: to offer an excellent audio performance at a bargain price.It definitely works, especially with this floorstanding flagship model.

The first thing you notice is that you've got a heck of a lot of speaker for not a lot of cash. At £330 these are the cheapest speakers on test (and because they're floorstanders, you don't have to budget for extra stands), but they're also the biggest.

They're not built from the most luxurious materials, but their unassuming styling makes them reasonably inconspicuous. They're not fussy over room positioning, avoiding boominess even when fairly close to a wall.

Now, if you expect a big floorstander to produce a big sound, you won't be disappointed here. The 1050is produce a massive rendition of the Raiders March from the Indiana Jones and the Kingdom of the Crystal Skull soundtrack. And if your inclination is to expect big, cheap speakers to be crude and heavy-handed in the bass, they will pleasantly surprise you.

On the contrary, the overall balance here is very impressive indeed: on top of a deep and powerful bass, there's a clear, refined midrange and a sweet treble

Good – but not precision instruments
The Adventures of Mutt, from the same album, reveals some limitations, however. The track is fast, rhythmic and almost chaotic, and the 1050is don't quite deliver it with the enthusiasm we would like.

Why? Their presentation misses just a sliver of precision and detail, particularly in that bass which, for all its qualities, is slightly soft next to the best rivals.

In addition, the leading edges of notes could do with just a little more attack and precision, while the sonic stopping distance of a note is fractionally longer than more musically exacting rivals.

Still, these speakers are undeniably capable, offering a much bigger and more balanced presentation than you should really expect for the cash. If you can live with slightly less than pin-point precision, they're a terrific, affordable option.