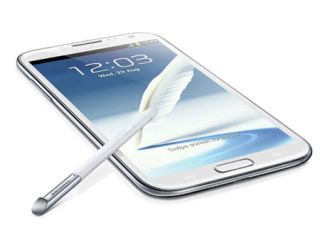 Samsung has, as expected, taken the white sheets off the Galaxy Note II today, revealing a phone-tablet hybrid that’s outwardly very similar to the original Note.

There’s 2GB of RAM and a 1.6GHz quad-core processor, and 8-megapixel and 1.9-megapixel cameras on the rear and front respectively.

Some new features include Popup Web, which allows you to open a moveable, floating web browser window from any link without having to switch to a new screen.

Popup Video does the same with movie clips, while Popup Note opens a new S Note in the same way, allowing you to jot away with the S Pen stylus while something else is going on in the background.

The Galaxy Note II will go on sale in October.