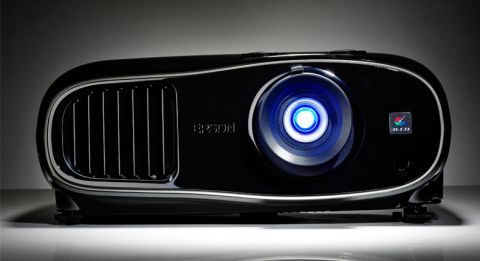 Performance-wise, the EH-TW6600 delivers everything but the kitchen sink. Another success for Epson

The EH-TW6600 is, like many an Epson to have come before it, a seriously competent projector. Its picture is rich, punchy and insightful, and the complete package when it comes to build and ease-of-use.

Epson has been consistently winning five stars of late (and an Award), so we have come to expect quality from the projector giant - and this EH-TW6600 doesn't let the side down.

The specification sheet here looks standard at this price point: Full HD, 3D playback (as well as 2D-to-3D conversion) and a decent number of connections.

Then you discover the 70,000:1 contrast ratio – seven times higher than most rivals. It’s not a typo, nor something we’d usually fuss over, but the proof is certainly in the picture.

Deep, oily blacks and punchy whites (even without the ‘Super White’ mode on) appear from the very first frame of our THX Optimizer disc.

Colours are bold and punchy, opting for outright richness over the slightly more natural, refined palette of the BenQ W1500. The Epson’s crispness and insight gives it the upper hand on its rivals though: Guardians of the Galaxy on Blu-ray is a picture full of detail and subtlety - every whisker on Rocket the racoon is perceptible, and the tree-like Groot is precisely outlined.

The EH-TW6600 sets the standard for sharpness at this price, edging the BenQ W1500 by a pencil shaving or two.

It doesn’t trip up with motion either. Fight sequences take place without a hitch, and when the team is eventually captured by the Nova Corps, clarity and insight are never lacking in the dark prison.

3D performance is impressive: it’s just as stable, detailed and clear as 2D, and communicates a good sense of depth as we look through the space shuttle in Gravity. Contrast remains the best in class - space suits stand out against the blackness of space. Our only grumble remains the richness of some colours, which can appear over-saturated.

There's a pair of active glasses in the box (a three-minute charge gives three hours use; 50 minutes for 40 hours), although you may need to budget for a second pair.

Even when dropping down to DVD quality, the Epson still manages to deliver big-screen thrills. It’s hard to tell the difference in resolution as we play sci-fi thriller Lucy.

People and objects in the background show excellent definition, and there are decent levels of subtlety and texture. From Scarlett Johansson’s red lipstick to her leopard-print coat, colours are vivid.

Set-up is quick and straightforward. Once powered up (the initially noisy fan soon settles), two dials above the lens deal with horizontal and vertical lens shift, while adjustable front feet make positioning easy. Clearly labelled volume and navigation buttons on top of the casework also help - these double as keystone adjustment controls.

The black-and-white menus are pretty basic and could appear bigger on screen, but they are easy to follow. The unit’s physical buttons are nice to use, although we soon turn to the remote control for handiness.

You won't easily lose the tall and chunky remote control down the sofa. It’s well laid out and despite a block of unnecessary buttons only relevant to the ‘W’ model (more on that below), it doesn’t seem cluttered.

Available in black or white, the EH-TW6600 is an attractive projector with a curvaceous front and glossy body (in true Epson style). It should sit comfortably on your average AV shelf.

The air vents push air forward, so there’s no danger of overheating. Helpfully, a flashing orange light on top of the unit warns you if this does occur.

You have to move up to the pricier EH-TW6600W for wireless connections (hence the ‘W’), but the EH-TW6600 is still well equipped. Easily accessible around the back are the usual component, composite and RCA inputs beside two HDMI inputs. A single USB for photo playback is a nice bonus, too. The mini-USB is only for service.

The Epson’s 20W speakers are rear firing, so are ideal if you’re sitting behind the projector. But if that’s not practical, don’t worry: they can belt out sound louder and clearer than most. It does a good job of spreading sound, but is still no substitute for a 5.1 surround package.

Overall, the EH-TW6600 is another resounding success for Epson. If you don’t care much for wireless features or portability, you can’t really go wrong for the money.