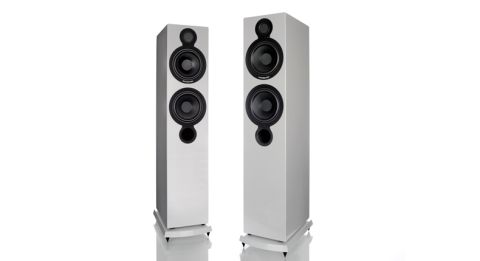 The Aeromax 6s aren’t without ability, but they struggle in some areas

Cambridge Audio’s Aero loudspeakers have already made their mark at What Hi-Fi? towers – we gave a 5.1 Aero set-up an Award just last year.

But Cambridge Audio believes it can take their performance to another level, in the shape of the Aeromax 6.

Not to be confused with a certain sports brand’s iconic footwear range, the Aeromax 6s improvements aren’t restricted to just a shiny new finish (although the gloss white and black options do certainly give them a classier look).

The Aeromax upgrade features a whole host of changes. One of the key design aspects of Aero is the use of Balanced Mode Radiators (BMR) instead of traditional tweeters.

BMRs have a much wider operating frequency range than conventional drive units. In this case, the BMR drivers – the small, top-most drivers – handle treble and midrange.

They cross over to the bass driver at 250Hz, where ears are less sensitive to the phase issues such circuits suffer from. The BMRs on the Aeromax 6s have been modified, with Cambridge claiming that the new drivers offer a more detailed and immersive sound.

Cambridge hasn’t left many stones unturned in its pursuit of a great speaker.

The 6s aren’t overly fussy about placement thanks to a front-firing port and wide dispersion. Just make sure you give the bolts and spikes on the plinth a good tighten before you start listening.

A speaker’s stereo imaging can really help to draw the listener in, and the Aeromax 6s do that well.

Play Sam Smith’s I’m Not The Only One, close your eyes, sit back and you’re just drawn into the music.

There’s a fantastic sense of depth and breadth, with the piano and Smith’s vocal sounding wonderfully direct without coming across too forcefully.

The way the 6s position the elements of a track is pretty exceptional – arguably unrivalled at this price.

The speakers sound solid and meaty in the bass too – there’s good extension and weight when playing Kanye’s Black Skinhead. The Aeromax 6s image so well that it’s easy to become distracted and almost overlook some areas that could be improved.

For example, they don’t have the same turn of pace as the top speakers at the money; low-level dynamic shifts of a track aren’t as apparent as they could be.

Play Brave New World from the Skyfall soundtrack and we’d like a bit more conviction and drive to the sound – it would help keep your attention and communicate the tension of the track.

Rivals such as the Q Acoustics Concept 40s show greater subtlety and differentiation between the notes.

You can hear a lot of potential in the Aeromax 6s. They’re easy to position and tough to beat in terms of stereo imaging.

In our opinion they need just a couple of tweaks here and there to transform them into really serious contenders.