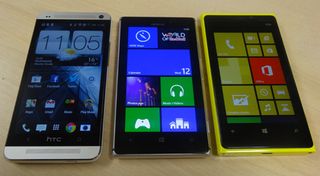 In this video we take a look at the new flagship phone from Nokia, the Nokia Lumia 925.

The Nokia Lumia 925 replaces the Lumia 920 as the top dog in Nokia's line-up, so we thought we'd compare the two – and bring our favourite phone, the HTC One, in to the video for good measure.

The Lumia 925 sports a new metal trim, looks to major on camera performance, particularly in low-light scenes, thanks to the addition of a sixth lens.

MORE: Samsung Galaxy S4 vs HTC One vs Sony Xperia Z vs iPhone 5

Also new is a Smart Camera app, with a host of new features, which is set to roll out to other Windows Phone 8 Lumia devices later this month. Missing from the 925 compared to the 920 is wireless charging out of the box – you'll have to add a wireless charging accessory.

The Nokia Lumia 925 price is expected to come in around £400 for a SIM-free device, or from free with a £34/month contract.