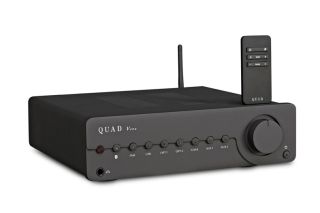 The stereo amp – complete with built-in digital-to-analogue converter – made its world debut earlier on this year at the Bristol Show back in February, but it will soon be possible to get your hands on the Vena yourself.

It is due to hit the shelves in mid-August in its standard Lancaster Grey finish for an expected retail price of £600. Three premium finish options - including Rosewood (below) - will be unveiled towards the end of the year, adding £100 to the cost.

In addition to its wide range of digital and analogue inputs, the Quad Vena wirelessly streams music using aptX Bluetooth – the codec designed to offer the "best possible audio quality" from compatible devices.

Digital inputs include two optical and one coaxial, along with two asynchronous USB sockets – one Type A and one Type B. The latter, says Quad, is used for connecting PCs/Macs; the former for other Apple devices.

Meanwhile, digital outputs include optical and coaxial and analogue signals are catered for with two stereo RCA inputs and pre-out sockets that allow you to add an external power amplifier to the system.

MORE: Read all our Quad news and reviews

In terms of the built-in DAC, it comes with the same high-performance 24-bit/192kHz chipset as also found in Quad's flagship Platinum CD player, as well as a Class AB power amp section and headphone source.

A Quad spokesperson says: "Vena’s sound is richly musical, delivering an effortless, wide-bandwidth performance with free-breathing dynamics. Above all, it lets the music do the talking.

"It’s all about fidelity to the source – this has always been Quad’s way of doing things, and it’s the reason Quad products are still revered worldwide some eight decades after the company was founded."