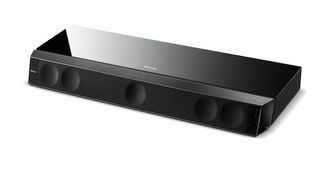 Part soundbar, part subwoofer, potential soundbase, the Dimension marks new territory for Focal. We were originally introduced to the Dimension concept back in January, at the CES show in Las Vegas, and now we've just come back from the full European press launch.

There are six channels of amplification (including one for the optional subwoofer), with a claimed total power ouput of 450W.

Connectivity includes one HDMI input, an ARC (Audio Return Channel)-enabled HDMI output, and optical-digital and analogue connections. At the front of the unit there is a touch-sensitive control panel on the right, while bass reflex ports are positioned either end.

The soundbar supports 'vanilla' Dolby Digital and DTS surround sound, but Focal couldn't confirm whether or not it supports the lossless Dolby TrueHD or DTS-HD Master Audio formats found on Blu-ray discs.

There's no Bluetooth or AirPlay built in – Focal claims this would add as much as €200-€300 to the cost of the unit. The company does, however, have its own optional aptX Bluetooth dongle, which some dealers may bundle in with the soundbar as a package.

Switches on the rear of the soundbar allow you to adjust for distance, positioning, room characteristics and whether or not you're partnering with a subwoofer.

There's a wallmount included in the box, as are feet should you want to place the soundbar on a suitably wide TV stand.

There are two subwoofer outputs – one for connecting to a normal active sub, the other specifically for use with the matching Dimension subwoofer.

The soundbar can be bought on its own for £800 or bundled with the passive subwoofer for £1100. The sub has a black glass top and sits directly behind the soundbar for the neatest fit possible – and, as these images show, you can stand your TV on top of it. If you want to add the subwoofer at a later date, it will set you back £329.

We're hoping to get our hands on a review sample in the next couple of weeks so stay tuned to whathifi.com for our full verdict.