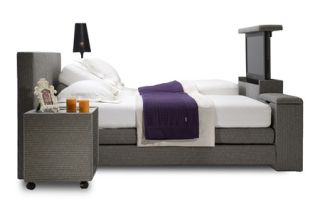 A UK-wide study of more than two million people by home furnishing retailer IKEA has discovered that around half a million of us are tuning in to TV, internet and games in the bedroom, and could be 'tuning out' of our relationships as a result.

Relate counsellor Christine Northan believes that being 'switched on' by our gadgets in the bedroom may be having an adverse effect on people's relationships, and even their ability to have a good night's sleep.

According to the survey, 22% of those interviewed watch TV in the bedroom, 20% surf the net in bed and 18% admit to playing computer games in the bedroom.

Apparently Londoners, Glaswegians and residents in Gateshead, Warrington and Wednesbury are among the top tech offenders.

"Modern technology provides us with a bunch of brilliant tools, but when the use of technology becomes excessive and clutters the bedroom, it can stop being useful and actually get in the way of relationships," says Relate's Northan.

Are you guilty of any of the above? Confess all in the Comments box below.