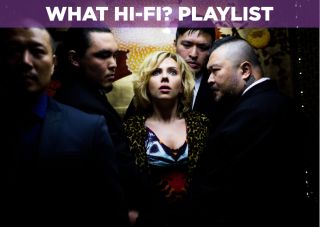 The popular urban myth that we only use 10% of our brains is the starting premise for Luc Besson’s latest film Lucy, a film that’s both ambitious and preposterous and bound to leave audiences either scratching their heads or fully onboard with its escalating silliness.

Scarlet Johansson plays the title character who finds herself in the wrong place at the wrong time when she’s kidnapped by a Taiwanese crime syndicate led by Korean crime-lord Mr. Jang (Min-Sik Choi).

Forced to become a drug mule and transport a new synthetic drug called CPH4, things go wrong when the bag sewn into her stomach splits, triggering (for some reason) her change from care-free party girl to cold-eyed killer.

Despite the 10% theory being bunkum, it doesn’t stop Besson from taking the premise seriously enough (but still having fun with it), using it as a pathway that unlocks Lucy’s biological evolution.

Each 10% increase sees Lucy gain additional talents: the ability to control her surroundings and other people, to talk to machines, to become impervious to pain, and on and on, evolving away from her original self. Is she evolving into a more advanced human or on the verge of losing her humanity completely?

It’s a question that the film is not all that interested in answering, instead being more inclined to set-up its thriller elements as both Lucy and the Taiwanese syndicate go after what's left of the drugs.

Johansson continues her good run of form, her performance here anchoring the film as she convinces as the petrified girl in fear for her life before becoming more and more detached as the drug takes hold.

This is less Marvel superhero and more Dr Manhattan from Alan Moore/Dave Gibson’s Watchmen as Lucy’s transformation leaves her on the limits of human perception.

And with this being the Johansson show, there’s not much room for other characters. Morgan Freeman’s scientist sets up the main plot and serves as Dr. Exposition for the remainder of the film. And he and Amr Waked as a French police detective do help add some context to the lead character's increasing madness.

The mixture of humour and more thoughtful elements don’t always coalesce, and there’s certainly one moment where we weren't sure whether to laugh or not, but Lucy certainly manages to stay fun and daft rather than boring.

It’s short, too, avoiding the bloat that’s affected so many films in recent years (we’re looking at you Mr. Bay) making for a lean film that still delivers plenty of action - and some splashes of ultra-violence for that matter.

The climax will divide opinion - and is somewhat reminiscent of Kashuhiro Otomo’s Akira - and we certainly feel it's something of an anti-climatic note to end on.

All told, it's refreshing to enjoy a female-led action film that is both more entertaining and more intelligent than the standard action fare.