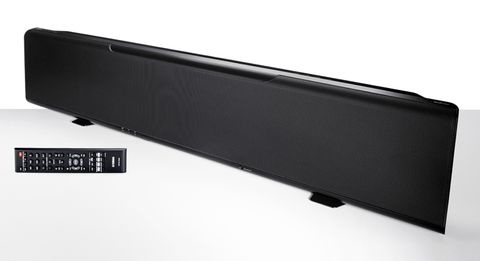 Dolby Atmos, meet the Yamaha YSP-5600 – which, for a hefty £1600, aims to provide a truly enveloping soundfield from above, without speakers in your ceiling.

So how does Yamaha do it? The same way its YSP range of soundbars have always done surround sound: using multiple array speakers and proprietary IntelliBeam technology to precisely aim discrete channels of sound around the room.

There are 46 speakers in total under the Yamaha YSP-5600’s grille: 44 array speakers and two woofers. Of the arrays, 12 are used as ‘height’ channels – six upward-firing drivers on each side bounce sound off the ceiling at just the right angle to make it sound like the sound is coming from above.

Yamaha claims that the YSP-5600 produces the same effect as a 7.1.2 system. That's seven surround speakers with one subwoofer and two upward-firing speakers. All from one single bar. That's a bold claim.

You’ll have to calibrate the soundbar to your room, so that it knows where to angle and bounce the output of those 44 speakers – a crucial step for this soundbar to work properly. A set-up mic is included, and the process takes roughly a minute.

Play the Blu-ray of John Wick (one of the few discs with an Atmos soundtrack) and the Yamaha spreads sound across the room with remarkable accuracy. The soundfield is massive.

You can hear surround-sound effects – the sharp ping of gunshots, the chirping of early morning critters, the club music – coming from beside you and behind you in a convincing manner.

Does it really give you sound from above? Yes, it does. A Dolby Atmos demo track of raindrops falling is more in front of you rather than directly above your head – but the height remains.

The final sound will be affected by how reflective your room is, but there’s scope to delve into the soundbar’s menu and tweak the parameters.

The YSP-5600 will never fully replicate the effect of having physical speakers in the ceiling for Atmos, but delivering such a convincing sense of height and atmosphere from a single chassis is truly impressive.

We can’t fault the YSP-5600’s surround precision, but we do wish it was a bit more revealing of a film’s soundtrack. Voices could be fleshed out a bit more clearly to convey nuances.

A little more subtlety would make the Yamaha soundbar just that bit more captivating to listen to.

Even with those relatively small niggles, the Yamaha delivers a solid performance packed with detail and power. The low-end performance has ample weight, lending authority to the thwack of flesh hitting flesh as the fights get hairy.

No matter how high we turn the soundbar’s volume up – and it can go pretty loud – the sound never hardens up at the top.

The same can be said for stereo music when streaming over Bluetooth or internet radio. It could do with more insight, but the sense of excitement and punch is still there.

Yamaha also makes a partnering wireless subwoofer, but choosing that option hikes the price up to £1900 and, quite honestly, the bar doesn’t need it. The low-end is hefty enough on its own.

We can’t ignore the obvious elephant in the room any longer: this soundbar is huge. We had expected it to be fairly wide to accommodate that number of speakers inside, but it's the height that smacks us with surprise.

Measuring 12cm, it’s tall enough to obstruct the bottom of the vast majority of modern televisions.

That height will pose a problem for many, as you’ll want to position the soundbar directly below your TV so the sound matches what’s on screen. So unless you have a TV that stands on stilts, you’re looking at wall-mounting the TV at least.

We wouldn’t place it on the shelf under your TV either, as that will block the upward-firing speakers from doing their job.

Placement issues aside, the soundbar itself is a sturdy, well built object. It’s fairly slim, considering there are 46 speakers inside. There’s a reassuring weight to the metal chassis, the all-black finish is spotless and the simple control buttons all look neat and orderly.

It doesn’t quite have the luxurious finish of the Dali Kubik One, but no other soundbar we’ve tested looks quite as stylish as the Dali. We do appreciate the discreet look of the YSP-5600 – it’s not likely to stick out sorely in your living room.

Our only major grievance is that the front display is too small and difficult to read behind the grille. We had to squint every time to read the scrolling text.

You do get your money’s worth in terms of features, though. The YSP-5600 comes with the latest streaming tech you’d find in any of Yamaha’s top AV receivers.

Along with standard Bluetooth and AirPlay streaming, you also get access to thousands of songs thanks to Spotify Connect integration and internet radio.

Streaming from your smartphone is swift and simple, especially when you use Yamaha’s MusicCast app.

Even if you won’t be using Yamaha’s new multi-room feature (which streams music across MusicCast-supporting products), the app makes setting up the soundbar with your home network and streaming from your smart device that bit easier.

It’s also essential if you want to use the Home Theatre Controller (WLAN) app to control other aspects of the YSP-5600.

It’s a bit of a pain having to use both apps (although you can switch between the two with one tap), but the HT Controller’s interface lets you make finer adjustments to the YSP-5600’s sound beams, select the various sound modes and change the volume.

We prefer using the remote control for those functions, though. It's laid out logically, the big buttons respond instantly and it’s a more practical design than we’ve previously seen from Yamaha.

It’s not all about streaming. You get a good selection of physical connections, all neatly tucked away at the back of the soundbar. There are four HDMI inputs with 4K/60p pass-through, and one HDMI output. There are also two opticals, one coaxial and a pair of analogue inputs.

As well as Dolby Atmos, the YSP-5600 will support DTS:X, the other big 3D sound format, but you’ll need to update the firmware at a future date for the full support.

The YSP-5600 successfully does what it sets out to do: deliver overhead surround sound from a single soundbar. It’s a hugely impressive technological feat, but here’s the dilemma: is that Dolby Atmos support worth the premium price?

There aren't many Atmos films out on Blu-Ray right now, and it looks set to be that way for the foreseeable future. However, the ones we have heard are worth investing in, and it makes us excited for the future of surround sound.

But we appreciate not everyone can install a fully separate speaker package in their living room, let alone add more into the ceiling. For those people, the YSP-5600 is an elegant solution with a genuinely immersive effect.

Yes, it’s expensive, but there is no other soundbar on the market that does what the Yamaha YSP-5600 does.