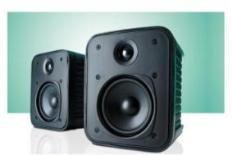 Every night is shout-yourself-hoarse party night with the 202s

A speaker's a speaker, generally, at this kind of price, so hats off to Teufel and its Omniton 202 – even
if we're not convinced we actively prefer its looks to the foursquare MDF-and-vinyl of its peers, at least it makes a change.

The looks are partially deceptive. Despite the rubber-and-corrugated-plastic finish, the 202s don't look well-sealed or robust enough to be considered for outdoor use.

But the bouncy housing and chunky grab-handle where more modest designs feature a rear-firing reflex port make the 202s perfect for carting about and plonking down.

They're a pair of 16-hole Dr. Martens in a group of seven reasonably stylish pairs of trainers.

Teufels just want to have fun
The sound, broadly speaking, is as fun and attitudinal as the looks. They're not short of dynamic ability, as a listen to quiet-loud-quiet classic A Spoonful Weighs A Ton by The Flaming Lips attests.

They positively relish being played loud, although the latently troublesome top end springs awake at volume and attacks relentlessly. The overriding impression is of a loudspeaker that's had perhaps one drink too many and is determined to enjoy itself at all costs.

Amon Tobin's Supermodified sounds authentically weighty played in these circumstances, while the midrange retains its poise and treble sounds continue in ‘clamorous' mode.

Positioning the Teufels like this brings problems of its own, though – Amon Tobin's cavernous low frequencies set the 202s' cabinets resonating freely.

At the risk of labouring the drinking analogy, then, the Teufel Omniton 202s are a little like being properly drunk: quite good fun for a while but not really the way to live on a day-to-day basis.

The looks are diverting, the energetic, insistent sound engaging right up until the moment it becomes draining – in the end, it turns out conventionality isn't such a bad thing at all.