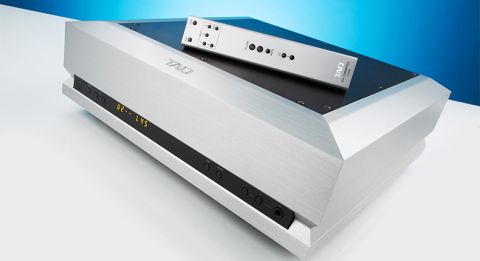 The TAD DA-1000 is one of the best DACs money can buy. If you have the budget you won’t be disappointed

To say we’re impressed by the TAD DA-1000 DAC is something of an understatement. We’re no strangers to fine-sounding high-end digital, but even among all the glitter this digital-to-analogue converter is gold.

TAD is pretty low-key when it comes to marketing, so we wouldn’t be surprised if the brand is an unknown entity to many readers. It’s owned by Pioneer. The name stands for Technical Audio Devices, and the company originally manufactured high-performance speakers for studio use.

Now it also makes a full range of high-end electronics, including CD players and pre/power amplifier combinations. After hearing what the DAC can do, we can’t wait to hear the rest of the range.

The DA-1000 is a heavy-set, chunky looking unit. It weighs in at a sizable 16.5kg, which is the kind of weight we’d normally expect from a decent premium amplifier. Much of that heft is down to the unit’s slab-like casework. It feels immensely solid and well damped.

Build and finish are immaculate – exactly what we would expect at this money – with every part of the casing precisely machined and aligned beautifully.

That front panel display is small, though. While it’s clear, even from a distance, there’s not a lot of information on offer. The thick metalwork hides part of the screen when seen from above, which is the angle at which we think it will normally be viewed.

Something like Audiolab’s M-DAC (£600) shows the DA-1000 how it’s done as far as display quality is concerned.

Get inside the case, carefully, and you’ll find neat circuit designs, a generous power supply arrangement and a great deal of care taken to lower jitter and noise levels.

The TAD’s connectivity is good. There’s an ample supply of digital inputs – USB, AES/EBU, optical and a pair of coaxs. The USB will cope with sampling rates up to 384kHz, while the optical input is limited to 96kHz.

The two remaining input options split the difference, coping with all rates up to 192kHz. As is usual at this level, balanced and single-ended analogue outputs are available – the unit sounding good with both options.

At the front you’ll find a 6.3mm headphone output with a dedicated volume control. This works independently from the main volume control that varies the signal coming out of the analogue inputs.

For once, we don’t have to moan about the poor quality of remote handset supplied with a high-end piece of kit. The one that comes with this DAC is nice to hold and easy to use. If only more manufacturers would make this much effort.

Once everything is up and running, we can’t help but fall in love with the TAD DA-1000’s sound.

It doesn’t take long for us to lose the Bryston preamp and use the DA-1000 straight into the power amplifier. The gains in transparency and resolution are significant, with little of the loss of body, dynamics and drive that usually results when we use a suitably specified DAC in such a role.

We start off with a CD-rip of Miles Davis’s Sketches Of Spain, and love what we hear. There’s just so much detail here, with the TAD digging out subtle instrumental strands as if its life depended on it. Everything is crisply defined without ever sounding harsh or overly etched.

It’s the DAC’s tonal sweetness that catches us off guard. For all its resolution and analysis the TAD never errs towards the clinical. It will reveal a poor recording for what it is, yet never makes a meal of things, refusing to overemphasise any brightness or aggression.

The longer we listen the more we come to appreciate the DA-1000’s sonic finesse; the ability to preserve the acoustic space around instruments and its fluid way with low-level dynamics.

Don’t get the wrong impression though. Switching to The Rolling Stones’ Gimme Shelter (24-bit/88.2kHz) shows this converter has plenty of kick when the music demands. It has the rhythmic ability to make the most of the track’s sparse opening section and the drive to let things rip later on.

Giving the TAD’s headphone output a go we’re really happy with what we hear. We try a range of music from Kanye West’s My Beautiful Dark Twisted Fantasy (16-bit/44.1kHz ) and Elton John’s Your Song (24-bit/88.2kHz) all the way through to Berlioz’s Les Nuits D’Été (24-bit/192kHz) and it never fails to shine.

Our choice of headphones for this testing alternates between Grado’s PS500s and BeyerDynamics’ T1s, and the TAD has no difficulty getting a great performance from each of them.

The sound mirrors that heard from the line-level outputs, remaining agile, articulate and wonderfully precise.

The TAD DA-1000 is one of the most capable digital-to-analogue converters we’ve come across.

Its approach is analytical, digging up as much detail as we’ve heard in our digital files, but the delivery has real verve and drive. It’s huge fun to listen to, and that’s not always true of many high-priced rivals.

Want the last word in stand-alone DACs? This TAD will give anything else we’ve heard a run for its money.