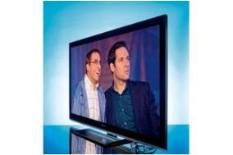 Big, beautiful and largely brilliant, this Bravia is deeply desirable

There's something magnetic about a big TV. And when the big TV in question is as beautiful as Sony's KDL-60LX903, that attraction is even easier to define.

Sony's new ‘Monolithic' design language has found its finest expression in the clean-cut form of this 60in panel: in a bid to ensure its lines are as unsullied as possible, even the rear panel has flush-fitting cable-managing panels.

It's also the only Sony to come with everything you need for 3D (bar a source component): the transmitter is built-in, and you get two pairs of specs. There's also built-in wi-fi (other Sony sets require an external dongle).

However, there are niggles. For example, the ‘60LX903 uses edge-lit LED backlighting, which seems odd given the picture quality delivered by the full array on Sony's HX903 range.

Using an edge-lighting helps deliver a slim profile, but it also means the Sony can't employ the same high-quality motion processing as the HX903s.

Online services abound
Still, you'd be hard-pressed to discern any handicaps when you switch it on.

Tuning is fast, with Freeview HD on tap, while locating wi-fi networks and configuring services takes moments. That done, you'll have access to services such as Flickr, Twitter, Demand Five and LoveFilm, and the Sony will also seek out and stream content from DLNA-compliant network devices.

Picture setup is easy, too. Either you can go manual, or you can use a built-in sensor to optimise picture and sound quality automatically.

The same system can also sound an alarm if your children are sitting too close, has face-recognition to turn off the TV if you leave the room, and can dim it if you look away for an extended period.

Freeview is remarkably smooth, even with low-quality signals. Certainly, we'd watch HD by preference but this one doesn't punish standard-definion TV and DVDs, unlike huge sets of yesteryear.

Black depth's satisfying too, as the Green Zone Blu-ray shows: the night scenes are as tough a test of contrast as any, but the Sony copes admirably, unearthing enough detail from each scene to keep the action intelligible.

Thrilling performance with 3D
And 3D? Load up WipEout HD and you'll be thrilled: the screen's scale creates its own impact, of course, and it could be argued that it's only at this size that 3D really comes into its own.

But it's hard not to admire the stability and edge definition. There's some 3D ‘crosstalk' both with gaming and the best 3D Blu-rays, but it doesn't spoil things, not least because (unlike some other 3D-enabled Sonys) dark scenes remained as dark as they should be.

Weaknesses are few. First, there's the sound, which lacks energy; hook the set up to an external sound system for the best results.

There's also the fact that for a grand less you can buy Sony's KDL-52HX903, which is eight inches smaller and not quite as thin, but does have, crucially, full-array LED backlighting.

But judged on its own merits, the KDL-60LX903 is simply excellent. It's comprehensively equipped, stylish and extremely capable. If you can afford it and accommodate it, it's a great TV.