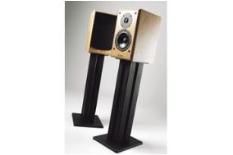 We first reviewed the Sabre IIIs back in May 2005. Having earned a glowing five-star review, they proceeded to come up trumps in a stereo speaker Supertest later that year.

The appearance looks a little dated now, especially when positioned next to the B&W CM5s or Roksan Kandy K2s, but don't think that this is reflected in the sound quality; the Sabre IIIs produce a lively, entertaining sound.

During Precipitato, from the LSO's Romeo and Juliet, the Ruarks have no trouble communicating the drama and urgency. Dynamically, they're very generous and explode into life on demand.

If you position the Ruarks out in the open, there's a chance that you'll pine for more bass weight. Move them closer to a back wall (about 20cm away) and you can add a little reinforcement to the bottom end.

You'll never be able to reach truly low depths, but you won't lose any of their versatility and agility in the lower reaches either.

Lady GaGa's vocals during Poker Face sound detailed and insightful. The Ruark's open and expressive nature lends itself well to getting across the full range of her distinctive voice.

Over-enthusiastic at the top
If there's one area that lets the side down, it's at the higher end of the sonic scale. Compared with its rivals, the Sabre IIIs sound over-enthusiastic in the treble.

They don't really get along with the edgy guitar sound that punctuates Lady GaGa's The Game. It sounds as if the top end needs to be turned down a notch and anyone buying these speakers should err on the side of caution and partner them with smooth-sounding electronics.

Play Maximo Park's Going Missing and the leading edge of the guitar strings sounds hard and unnatural; you you can also hear sibilance in Paul Smith's lead vocal.

Four years ago, the Sabre IIIs enjoyed great success, and at many levels these speakers can still mix it with the very best.

However, they are expensive and that, combined with question marks over their handling of high frequencies means we have to dock them a star.