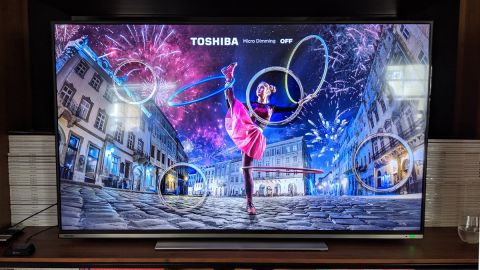 Toshiba has just unveiled its L7 series of affordable 4K TVs and we were lucky enough to get some hands-on time with the 55in Toshiba UL7A just ahead of launch.

The premium set from this late 2019 range, the Toshiba UL7A is a 4K HDR set, available very soon in 49in and 55in sizes for just £449 and £549 respectively. Too good to be true? It’s too early to say for sure but these are our first impressions.

It might be the beautiful surrounds of the classy City of London apartment where Toshiba has brought us but the L7 series certainly doesn’t look out of place. With edge-lit LED technology and a minimal bezel, it’s the kind of fashionably thin, all-screen affair that people want.

It’s framed in tasteful chrome with a matching, squared-off aluminium stand and, interestingly, comes with not one but two remote controls. Toshiba intends the larger one with the number pad for those more interested in live TV but has introduced something smaller for the on-demand generation. Each has dedicated buttons for Amazon Video and Netflix and we’re pleased to report that, again, they’re both stylish and ergonomic.

The Toshiba UI has been redesigned and it’s both subtle and easy to use. It’s also good to note that most of the big apps are represented and that both Netflix and Prime Video are available in 4K HDR. Speaking of HDR, the L7 and L5 TVs support Dolby Vision, HDR10 and HLG.

The final interesting addition to this TVs is that it’s Alexa-enabled. Of course, you can plug in an Echo of your own but Toshiba has also launched its Toshiba Connect add-on, which you attach to the set by USB. It’s a far field microphone device, complete with an all-important mute button, and is designed to hear you from 10-15ft away.

Having had a play with the voice control it currently seems to be passable but fairly limited at present. It turns the TV into something of a large Amazon Echo Show and allows you to ask for the weather report, the news headlines and search the internet, as one would expect, plus you can access other Amazon services including Music.

There are some core TV voice-activated functions too. You can change the volume, switch live TV channels or turn the TV on and off, but that’s about it. Certainly worthwhile if you manage to lose both of the remotes but nothing to go crazy about just yet.

Going through Toshiba's demos, the UL7A screen technology certainly looks promising for a TV of this budget. The TRU Picture Engine is at the heart of the company’s 4K line-up and its focus breaks down into micro-dimming, motion processing and upscaling.

With TRU Microdimming, the engine analyses 2,300 different zones to provide the correct contrast levels in each area. The twilight cityscape we’re shown is definitely clean and crisp with the skyscrapers lit up like Christmas trees by their precisely and neatly illuminated windows.

TRU Resolution helps to provide better detail calculations when upscaling from SD and HD. Sitting within a few metres of the 55in Toshiba UL7A, the daytime TV programmes in SD certainly don’t look like a mess. Edges are smooth enough and there’s little blur during moments of movement. It’s only a few moments of Bargain Hunt but it’s watchable.

TRU Flow is the final of those three processing musketeers. It adds a predicted frame between each image of source material to try to smooth out judder. The motion processing leaves Gal Gadot looking a little too much as if she's in a soap opera when we dip into Wonder Woman in 4K, but there’s certainly hope for a better experience given time to dial TRU Flow down to a lower setting.

In general picture terms, there’s certainly nothing awry as we glance at the HD footage on Netflix. Toshiba is proud of the Wide Colour Gamut tech its used to boost colour production and there’s nothing that leaps out on the spectrum in terms of a colour imbalance.

As for performance in darker scenes, in terms of black depth and detail, we’ll have to wait until we get the Toshiba UL7A into our labs.

Toshiba has partnered with Onkyo for its late 2019 TV releases. The UL7A gets two 15W drivers and a 12W sub. They’re tastefully sculpted into the base of the rear and have the help of DTS TruSurround to boost the soundstage.

In truth, it’s not really an effect we can appreciate during the hands-on session, as the TV is installed deep into an alcove of wall units. The sound stays very much contained to a single point with no projection into the space whatsoever. There’s no spatial quality to the soundscape that makes it out to the sofa.

There’s little that blows us away in terms of detail or dynamism either. It can turn up a fair way before the sound distorts and dialogue is certainly easy enough to hear as a TV bailiff begins shouting through letterboxes, but we’ve no firm impressions on tonal balance to offer as yet.

Ultimately, it’s just not possible given the set-up as we find it but we’re pleased to report that the Dolby Audio Processing tech is in working order when the daytime programme switches to the commercial break and the volume remains consistent.

Much more on whether these speakers live up to Onkyo’s reputation once we get the UL7A in for full review.

These are some very good prices for 4K HDR TVs and there’s enough in the quality of build and what picture performance we’ve seen to leave us excited about the Toshiba UL7A.

The Toshiba Connect technology is a bit awkward to say the least, but look to the colours, the sharpness of image and the picture consistency we’ve seen so far, and you’ll see the signs of a solid product to keep an eye on.