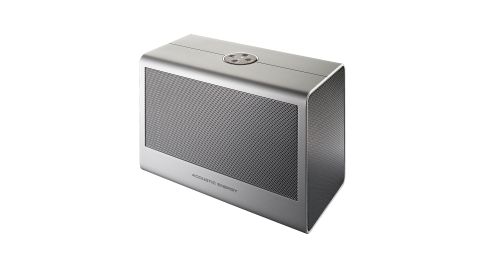 Sonically, the Aego BT2 doesn’t get much drastically wrong, but it doesn’t do much right, either

These days it’s rare that a traditional hi-fi manufacturer hasn’t diversified into the realm of ‘lifestyle’ products, such as wireless speakers. It makes perfect sense – the market is huge and if a company can build a five-star hi-fi speaker, surely it can produce a wireless speaker that sounds better than most.

Acoustic Energy saw this opportunity early, launching a Bluetooth speaker in partnership with the Orange phone network (remember that?) back in 2006. In 2017, it launched its second Bluetooth speaker, the Aego BT2, with a price tag of £249. We’ve only recently been given the opportunity to review the BT2, but happily, in the intervening time the speaker has had £100 knocked off its price.

The Aego BT2 is a solid little slab – squat, compact and surprisingly weighty. That density combines with premium materials (the shell largely comprises aluminium) to generate a feeling of quality, but despite its size and battery life of up to 36 hours, you may think twice before chucking it in your backpack or suitcase, largely on account of its 2kg heft.

The design is minimalist and fuss-free; you could refit your kitchen three times over and still find that the Aego BT2 suits it perfectly well each time.

Most of the front panel is taken up by a colour-coded, fine-mesh grille, behind which sit two 2.5in drivers, while each of the two black ends of the device hides a bass radiator. Acoustic Energy rates the Aego BT2’s total power at 40W.

On the rear, you’ll find a USB socket for charging, plus a 3.5mm line-in for physically connecting a source device. Most devices will connect via Bluetooth, of course, with the Aego BT2 offering Bluetooth 4.2 in audio-friendly aptX form.

There are four buttons on the top panel, presented in a diamond formation: power, Bluetooth (hold to pair), volume up and volume down. A tiny white light indicates power, while a blue one acknowledges a Bluetooth connection.

The Aego BT2 gets a lot right on the design front, but sound quality concerns emerge as soon as we start listening, after a whole weekend of running-in.

We start with Fake Lightning by Pianos Become The Teeth, and the sound is congested and muddled. This isn’t the clearest or cleanest track, but it’s obvious that the Aego BT2 struggles more than most with the indistinct production. Instruments and vocals blend into one another, which makes it hard to follow. There’s decent weight and depth to the solo drumbeat, but when the rest of the instruments kick in, they tend to get lost in the melange.

The congestion seems to be as much related to a lack of positional organisation as it is timing. The narrow soundstage leaves little room for instruments to breathe. When the track simmers down to just drums and vocal, the Aego BT2 makes a better case for itself, with reasonable clarity, projection and balance. But when things kick in again, that confusion returns.

That said, there’s good tonal balance, with no part of the frequency range sticking out inordinately. Treble could do with a little more sparkle, but it avoids the sort of brittleness to which many such products succumb.

Switching to The Road by Nick Cave and Warren Ellis, we encounter a hollowness to notes. Each draw of the bow across the violin begins as it should, but quickly gives way to emptiness. There’s a lack of fullness and texture that leaves your musical appetite unsated. You’d think it was an electric violin – there’s a digital quality to the sound that undermines this most analogue of productions.

SBTRKT’s Trials Of The Past better suits the Aego BT2’s ability, with the sparse production requiring less in the way of organisation. Here the vocal emerges clearly, with decent detail and immediacy. There’s a little sibilance in the track that lesser speakers highlight, but the Aego smoothes the rough edges without removing too much of the zing.

It’s a fairly punchy delivery, with the leading edges of notes delivered crisply. The digital nature of the beats makes that hollowness less noticeable – although it’s still something of an issue with the vocals.

Rounding off with Every Other Freckle by alt-J, the Aego BT2 is back in muddled, congested territory. There’s little in the way of spatial or tonal distinction between musical strands, and the Aego BT2’s qualities are simply buried in the morass.

The Acoustic Energy Aego BT2 is far from unpleasant to listen to, but neither is it interesting or fun. In a world where you can buy an Audio Pro T3 for less money, that’s a problem.

This is a nicely made, stylish little speaker with excellent battery life, but it doesn’t make nearly enough of your music to receive a serious recommendation.