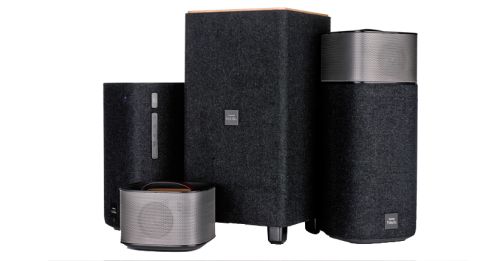 The E5 is a lovely idea, but there are limitations to its application and it’s quite pricey

We like the idea of the Philips Fidelio E5. It’s a 2.1 stereo set-up that can be transformed into a surround-sound system. How? By detaching the small, wireless speakers from the top of the main fronts and positioning them as rear speakers.

The Philips E5 then cleverly switches into surround mode, and voila: you have a 5.1 home cinema system! Except, of course, it’s actually a 4.1 system, with the front speakers creating a virtual centre – a bit like the ‘sweet spot’ achieved by hi-fi stereo speakers.

It’s a stylish, fun idea, but does it work?

It’s a compact, gorgeous-looking system, the soft, grey cloth around the front speakers giving it a luxurious feel.

A single cable connects the two speakers; it’s long enough to place them on either side of a 50in TV. The slim subwoofer is similarly styled, with the wooden top capping off the modern look.

The small ‘rear’ speakers break up the uniform look with a metal grille instead of the cloth finish, but they’re light and sturdily built. They even have leather handles.

Detached, these speakers can last up to a claimed 10 hours on a single charge. Simply slot them back into place on top of the front speakers (they fit together neatly, if a little loosely) when you need to charge them up.

Unlike a traditional 5.1 system, there’s no complicated set-up procedure with the Fidelio E5.

It does, though, seem strange that there’s no way to tell the Philips’s processing exactly where we’ve placed the speakers so it can optimise the sound quality according to the room environment.

While the design suggests positioning is flexible, in reality it’s more complex. To keep the rears at ear-height, you’ll need stands and if you don’t have enough space on your TV rack for the front speakers, you’re looking at yet another pair of stands.

Suddenly this system seems less straightforward than we initially thought.

It doesn’t want for connections, though. There are two HDMI inputs, a single HDMI output, single optical and coaxial inputs, and a 3.5mm jack for music players.

You can also stream music over Bluetooth (aptX codec) and connect smart devices. The included remote is a simple design, with easy to use buttons that spell out the basic controls.

You can adjust audio sync, bass and treble levels, and switch between surround and stereo modes.

Changing inputs and volume is fairly responsive, although sometimes it feels there’s a split second delay between button-pressing and LED-blinking.

So how does it sound? Punchy, detailed, and easy-going – it’s the Philips Fidelio sound that we’re well acquainted with. There’s sparkle to the glass-shatters and explosions in The Amazing Spider-Man 2, without any hint of excess brightness.

Punches have impact, dialogue is easy to follow, and there’s a definite sense of surround sound.

Flying bits of carnage zoom past you, although it’s not as accurate or powerful as a dedicated surround sound package, or even a talented soundbar such as the Yamaha YSP-2500.

It’s a clear sound that’s easy to listen to. We like this laid-back character, but it does hold the E5 back from expertly delivering the more visceral scenes in a film.

Tauter bass would give a more authoritative performance. The lack of a dedicated centre channel is keenly felt when viewing dialogue-driven films such as The Grand Budapest Hotel.

Voices hover in the middle, but it’s not as solid and nuanced as it could be. There’s also the fact that the E5 is only capable of decoding Dolby Digital 5.1, DTS Digital surround and Pro Logic.

That takes care of standard surround sound, but with no Dolby TrueHD or DTS-HD Master Audio support, you’re missing out on the benefits of HD audio from Blu-ray discs.

The Philips Fidelio starts out as a great idea, but the novelty of the detachable speakers wears off when it comes to practical application.

They’re beautifully made and their laid-back presentation is easy to get along with, but the £600 price tag demands more and we can think of packages that do a much better job at similar money – such as Tannoy’s HTS-101 (£350) with a suitable amplifier.