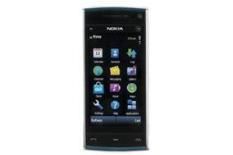 A very good handset that could be great with a smoother operating system. Worth a punt, though

With the Apple iPhone's arrival on Orange and its recent launch on Vodafone, other mobile phone manufacturers face quite a battle to get your business.

You can't fault Nokia for effort. If you sign up for a ‘Comes With Music' handset, such as the X6, you're entitled to a year of free music downloads from Nokia's online music store.

After the 12 month contract runs out, you can keep all the tracks with no catch. This is a great lure, but Nokia's latest music mobiles have been rather hit-and-miss. Does the X6 do enough to change opinion?

Other niceties include a 5MP camera with fancy Carl Zeiss optics, wi-fi connectivity and a 3.2in, 360 x 460 pixel screen.

The Phone's Symbian operating system works well, with only the slightest hesitation during menu navigation. The X6 can't quite match the fluidity of the iPhone and the touchscreen response isn't as instantaneous, but the handset isn't light years behind.

Easy access to your tunes
Nokia's Ovi Player software works smoothly and transferring music files from a PC is done without any major traumas.

There's a wealth of multimedia handsets on the market and all of them get compared to Apple's iPhone. So, it's nice to say that the X6 stacks up reasonably well. Although the phone isn't without a couple of flaws, it's enough of a draw to give it a whirl.

See all our mutlimedia phone reviews