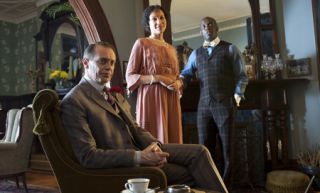 Disc of the month

HBO’s flagship is a Blu-ray must-buy

Band Of Brothers, Game Of Thrones, Sex and the City, The Sopranos, Treme, True Blood, The Wire – all were made by HBO, and yet these represent just selected highlights from what has been a consistently brilliant body of work.

So it’s no surprise that, as HBO’s biggest and most ambitious series, crime drama Boardwalk Empire, is more than a bit good. Indeed, the show’s first season garnered eight Emmy Awards and two Golden Globes.

It’s built on strong foundations, with Martin Scorsese as its executive producer and The Sopranos’ scriptwriter Terence Winter penning the dialogue. A lavish budget (the first episode, the most expensive pilot in TV history, cost $18 million to create) has helped invest every scene with a wondrously convincing look and feel – especially on this five-disc box set.

Resplendent in 1080p and complete with a DTS-HD Master Audio soundtrack, each episode is as cinematic to behold as any comparable feature film. For all that, Boardwalk Empire’s greatest achievement is that it approaches the gangster genre from a new perspective, focusing not on a specific moment in time, but on the period as a whole.

Set in 1920s’ prohibition-era Atlantic City, it revolves around Enoch ‘Nucky’ Thompson, a local politician and part-time bootlegger who, as the story evolves, finds himself being drawn ever further into the nefarious world of the fully fledged gangster, complete with infamous villains such as Al Capone, Bugsy Siegel and Lucky Luciano.

The first episode centres on the very day that prohibition came into being, an event greeted with avaricious glee by Thompson and his entourage. As the story unfolds, you play witness to each key character’s descent into corruption.

It’s a carefully paced and deliberately measured delivery – some may find the opening episodes a little slow – but the long-term gains to this approach are great, helping to flesh out characters that might have appeared as little more than one-dimensional monsters.

Of course, given the nature of its subject matter and the proclivities of its creative masterminds, Boardwalk Empire’s not without its moments of brutal excess, but somehow it all seems appropriate to the moment, much as the script’s willingness to employ industrial language reflects on the adult themes of the matter at hand.

But that shouldn’t detract from what is, by any standards, a thought-provoking and intelligent drama of the very highest calibre.

Drake is about as hot as it gets in North American music – the Canadian rapper is already bigger than the hip-hop genre from which he comes.

Take Care finds him in familiar territory – but in the best form of his short career. His effortless drawl remains his trademark, alongside chief producer Noah ‘40’ Shebib’s melancholic, minimal beats.

But it’s the saccharine vocal melodies that make the album. As narcissistic as any rapper, Drake’s mood remains irritatingly tortured, his genre-typical braggings qualified at every step by apparent insecurity and – frankly – whining at what sounds a like decent life to us. Fortunately, the music is worth the moaning.

Production is clean, with intimate vocals sat atop crisp, simple drums and deep, smooth bass notes. Headlines builds with synths and snares before bothering your sub and unleashing the hook, while Take Care lifts a Jamie XX track, adds a Rihanna cameo and sets sail for radio rotation.

But it’s drunken slowjam Marvins Room which nutshells everything that people, probably including Drake, will love (and hate) about this album.

Sublime and ridiculous all at the same time, the 10th album of Kate Bush’s singular career (only her second album of original songs in 17 years) is a stately canter through a winter wonderland.

Lengthy (its seven tracks come in at a little over 65 minutes), lascivious (Misty is an account of a necessarily brief tryst with a snowman) and elegantly built around chamber-ish piano, 50 Words For Snow is warm, accessible and entirely inimitable.

The voice is deeper and more textured with age (on Snowflake Bush’s teenage son Bertie occupies the upper registers once his mother’s territory) and heavyweight support is lent by Elton John (on Snowed In At Wheeler Street) and Stephen Fry (in best Viv Stanshall mode on the title track).

The sound is spacious and intimate, dynamic and organic. It’s beautifully recorded, painstakingly rendered and offers the sort of full-body workout that separates the great systems from the merely good.

Most artists who can muster a mere seven songs over the course of seven years might expect a critical backlash. Not this one.

Conan: blood and breasts – and that's just the hero...

Conan’s excesses of blood, breasts and brutality may titillate the easily pleased, but the moronic script and some laughably poor performances scupper it. The 7.1-channel audio is decent, but the dismal 3D transfer does little to lift the gloom.

However long they watched, the question remained the same: 'Why?'

A slavish remake of the 2009 original, this is a disappointment. For all the appeal of its vulgar humour, a scattergun script and ham-fisted plot devices conspire to undermine it. Decent picture and sound help its cause… but only a little.

It just shows what can be done when you take pride in your work...

3D conversions seldom work well – but this is a spectacular success. This 3D redo has brilliantly realised visuals and a wonderful DTS-HD 7.1 soundtrack, combining to create an experience that is, at times, astonishingly impressive.

For more on the 3D reworking of this Disney classic, click here.

This fourth Assassin’s Creed game concludes Ezio Auditore’s journey. Newcomers may be bemused by the shifts from Constantinople to the near future, but the stealth-action gameplay, superb story-telling and presentation is undeniable to all.

It’s Call of Duty, so you know what to expect: a short, almost on-rails single-player campaign with stunning setpieces, and some of the tightest, most balanced and addictive multi-player experiences in gaming. Predictably brilliant.

Skyrim drops you into a beautiful, snowy, warravaged land, and then adds dragons into the mix. Luckily, you’re ‘Dragonborn’; it’s your task to find out what that means as you battle through hours of questing. If we had a sixth star, we’d give it.

Oh, and this month we have mainly been listening to…

– 1 Lang Lang’s Liszt: My Piano Hero is the delicate, eloquent sound of an artist on top form

– 2 Elbow is writing the music for the BBC’s Olympic coverage. So we’re revisiting Asleep in the Back

– 4 Who’s tarnished one of The Smiths’ finest on behalf of John Lewis? Slow Moving Millie, that’s who

We update our Spotify playlist every month: click here to listen, and send playlist suggestions to whfedsteam@haymarket.com