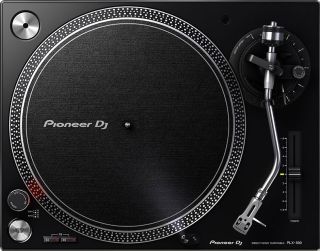 The PLX-500 comes from Pioneer’s DJ division, targeted at DJs, but it can also be used at home within a traditional hi-fi setup. The new model has a reduced pitch range and lower torque compared to the PLX-1000, but Pioneer DJ says it can still be used by scratch DJs.

Looks-wise, it bears a resemblance to the Technics SL-1200G and has been designed to be as plug ’n’ play as possible. It comes fitted with a cartridge, stylus and slip mat and has a line output for bypassing an amplifier. It also comes with an adapter for 45rpm records.

The PLX-500 also gets the added benefit of a USB output that allows you to record your vinyl collection to Pioneer DJ’s free Rekordbox software.

The software has recently been updated to detect silence between tracks, meaning that albums will automatically be recorded as separate tracks.

The Pioneer DJ PLX-500 will be available from early September in black or white, priced €350. Read more about the PLX-500 and the Rekordbox software, as well as where to buy one in the UK, on the Pioneer DJ website.