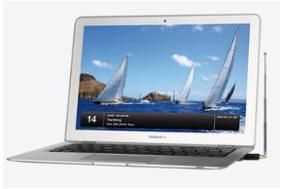 Costing £79.95, the USB stick will allow you to watch Freeview TV on your PC or Mac, and watching England win the World Cup would be all the more sweeter with the knowledge it means 'cash back' in to the bargain.

EyeTV DTT Deluxe is described as the smallest, full-featured DVB-T stick in the world, bringing you all the action of Freeview TV to your laptop by just hooking it up to your USB port.

You'll be able to watch all the TV shows and sport shown on Freeview on either your Mac or PC, and pause and rewind live TV. There's even software bundled with it that'll allow you to record content to watch later.

The Elgato EyeTV DTT Deluxe TV is in shops from mid-April and each promotional pack will also come with a little England flag for you to fly proudly in preparation for the World Cup.

Buy it before 11 June and register it before 25 June and you'll be eligible for the cashback if England win the World Cup. And yes, we realise that's a big if...