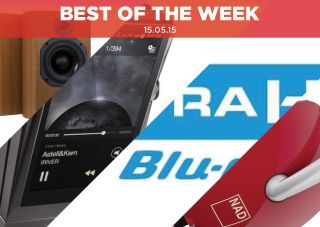 This week was filled with news about high-res and Ultra HD as details emerged of 4K Blu-ray players going on sale as early as September, Qobuz launched its streaming and download subscription tier Sublime and Astell & Kern announced a new portable high-res audio player.

On the reviews front we have Q Acoustics' 3050 floorstanders, ATC's premium SCM19 loudspeakers and the brilliant Burmester 032 stereo amplifier.

Speaking of Germany, we were at the Munich High End show this week and you can keep up with the latest news on our dedicated highlights page.

MORE: The tech behind the great vinyl revival

4K content is set to receive a boost with Ultra HD players set to for an unveiling in early September.

We've known for some time about the specs of the new players, but in an interview with What Hi-Fi?, Ron Martin - VP of Panasonic Hollywood - has gone a step further by saying he hopes to see Ultra HD players ready by IFA in September.

Martin also suggested that prices for players will demand a slight premium, while prices of the discs themselves are expected to be around the cost of a standard Blu-ray.

EXCLUSIVE: Ultra HD Blu-ray explained - and why it can succeed - by the man behind the format

Qobuz's new subscription tier, Sublime, was unveiled earlier this week to customers in several countries with the promise of offering high-res downloads.

The service costs £220 a year and for that you get access Qobuz's CD-quality library of tracks and access to discounted 24-bit high-res downloads.

The French company also teased the appearance of high-res streaming in its press release. Could they be one of the first to market with high-res audio streaming?

This one takes over from the AK240 (which we saw at CES 2014) and offers a number of new features and improvements.

Dual 32-bit DACs, advanced jitter reduction and a larger battery are all present, along with 256GB of onboard storage (which can be expanded) and native DSD playback.

We had lots of kind words for Q Acoustics' 3020 standmounters a few weeks ago, and after testing the 3050s we're not inclined to stop the love-in.

The 3000 range is set to replace the well-regarded 2000i family of speakers, and based on what we've heard they're as good as their brilliant predecessors, if not better.

The 3050s offer that hugely likeable Q Acoustics sound that's refined, subtle and they don't scrimp on authority or transparency.

They'd give speakers twice their price a run for their money. A stellar pair of floorstanders.

We're big fans of ATC's loudspeakers and the SCM19s are another impressive offering.

Expanding on the SCM11s, they have a bigger cabinet and incorporate a new tweeter (25mm). Run them in for a day or so and you'll notice up the scale and clarity of recordings, along with the speaker's impressive control over tone and dynamics.

They're honest speakers, ones that render our music in a hugely pleasing way. There are few better at this price.

Burmester's 032 stereo amplifier is big, powerful and sounds every penny of its £12,380 price tag.

You'd expect nothing less from this high-end German manufacturer, and the 032 exudes quality in both build or performance.