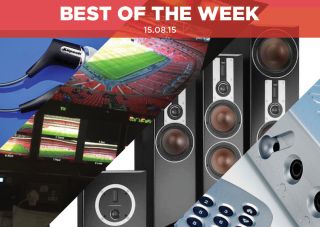 A strong week on the product reviews front this week, with four- and five-star reviews of some key products from big-name brands, including the Chord Hugo TT, Klipsch Reference R6i and Sony 8505C 4K TV.

There were new products, too - from soundbars to all-in-one sound systems - and even a whole new hi-fi company, in our news channel. Lest we forget, we also had an exclusive video of some new speakers.

If you want to catch-up on the past week's news and reviews, you're in the right place...

On sale in September, the new Dali speaker range features a total of seven different models, all of which borrow technology from Dali's Epicon and Rubicon series.

While the launch of an Ultra HD TV channel is obviously good news for those of us hungry for higher resolution video content, it seems not everyone was feeling the benefit.

A number of BT Sport viewers took to social media to complain about the quality of the BT Sport HD channel - many of whom wondered whether the launch of BT Sport Ultra HD had caused a drop in picture quality.

What Hi-Fi? Deals of the Week

Chord's Hugo DAC wowed us when we first reviewed it last year, and now the company is back with a revised version, the Hugo TT.

TT stands for table-top and serves as a clue as to Chord's intention. This is meant to join the dots in your hi-fi system rather than act as a portable DAC.

And it's a success. The Hugo TT sounds even better than the original, with plenty of detail and clarity to go with its impressive sense of dynamics.

Klipsch's R6i in-ears are fun little headphones and a good way to spend £55.

Why are they so fun? It's not necessarily the looks, but the performance which delivers power and rhythm in spades.

If you're not looking to break the bank, a pair of these in-ears would go down well.

The premise of the Samsung Galaxy S6 Edge+ is very simple – to bring a bigger screen to the Edge experience.

This time, though, it takes the curvy fight to the likes of the iPhone 6 Plus and Samsung's own Note range, and we've no doubt it will give all big-screen phones some serious competition.

Sony's attempt at affordable 4K is a strong effort.

Where it performs well is in its picture, creating some bold, lovely images (although a little more contrast wouldn't be amiss).

It becomes a slightly more mixed bag with the Android TV software, which lacks the speed and intuitiveness of other Smart TV operating systems.

This TV is still worth a punt, however, thanks to packing in a lot of features for the price.