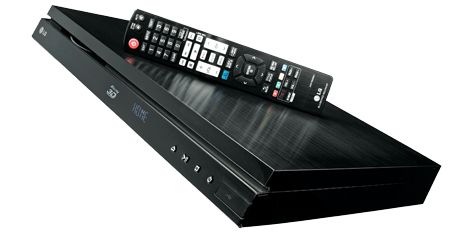 A delight to use, and the Freeview option counts strongly in its favour

Latest generation Blu-ray players are no longer just simple disc-spinners. Not content with being able to play Blu-rays, DVDs and even CDs, many also act as portals to online video content.

The LG HR925M takes it a step further, boasting the inclusion of twin Freeview HD tuners, and the ability to record programmes onto its 500GB hard drive.

Setting up the tuner is swift and painless, with the menu controls self-explanatory, so you’ll be flicking through Freeview channels in no time.

Recorded programmes get stored on the aforementioned 500GB-capacity hard drive accessed via LG’s Smart Share hub, where you can also play back media content stored on your computer or USB stick over a home network. The LG also supports most popular file formats (except FLAC).

As with other Blu-ray players from the company’s 2012 range, LG’s Smart TV technology has been integrated to give you access to a wealth of entertainment, lifestyle, education, news and games apps that you can buy through the firm’s App Store.

There’s also LG’s Premium video-on-demand service, which gives you access to dozens of movies on Acetrax and LoveFilm.

Play the Blu-ray of Blood: The Last Vampire, and while the action sequences are silly and over the top, the LG keeps up with the fast pace of the swordplay, following each swish of every blade.

The contrast is a tad overblown – there’s scope to adjust it in the LG’s settings, but to do so changes the black/white balance of the rest of the image too much. This means the bright edges remain rather over-etched, and lose some of the gradual shifts in tone and detail that are so expertly handled by rivals such as the Panasonic DMP-BDT500 and Sony BDP-S790.

The colour palette is a bit on the lean side, but black levels are deep and strong even if some detail of shadows fails to show through.

When it comes to sound, the LG doesn’t quite muster up enough strength to match its chief rivals. That’s first shown by the fact that dialogue isn’t as direct as it could be, but it’s most evident in a general lack of refinement.

Even so, the big crashes and wallops still make sufficient impact to keep you immersed in what you’re watching.

Spin the DVD of British comedy Death at a Funeral and the LG does a decent job of upscaling to 1080p, making it fun to watch despite some lingering picture noise issues.

Switch to the 3D version of The Adventures of Tintin and, compared with the smoothness of the Panasonic and Sony players, the LG has a few 3D motion judder and blurring issues. It remains very watchable overall though.

The player itself is a sturdy piece of kit that ignores the trends of slimmer rivals, but remains up-to-date with a slot loading bay and a swanky smartphone remote app. That feature acts as an alternative to the more traditional remote control, which is conservatively styled but sensibly laid out.

The 925M is also singular in having raised buttons rather than touch-sensitive controls likesome others we've seen, but it’s in line with LG’s general user-friendly take.

The HR925M’s isn't the cheapest player in its sector, but you get a lot for your money. It may not be the last word in picture and sound quality – not with the stiff competition it’s up against – but its long features list, and addition of Freeview HD tuners and hard-drive, make it a very desirable product indeed.