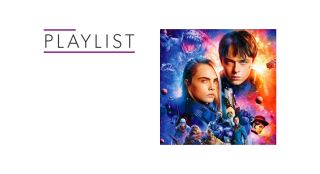 Valerian and the City of a Thousand Planets is Luc Besson’s return to the genre in which he so memorably made in an impact with The Fifth Element twenty years ago.

It was a passion project for French director, a fan of the Valerian and Laureline comics, who channelled that passion (to the tune of nearly $200 million) into bringing the universe of Valerian alive.

It only managed to scrape its budget costs back at the box office, making this something of a financial disappointment. But was its reception merited, or does it warrant a more favourable verdict for its home release?

In the 28th century there’s a vast space station called Alpha, where species from thousands of planets live together sharing knowledge and culture. Their peace is endangered by a threat at the heart of Alpha, which requires a team of special operatives - Major Valerian (Dane DeHaan) and Sergeant Laureline (Cara Delevigne) - to identify the threat and safeguard Alpha from a secret that could destroy it.

There’s something of a John Carter vibe about Valerian. Andrew Stanton’s film was the inspiration for many films but by the time it came out it seemed unoriginal. There’s plenty to like about Valerian - the imagination on offer, its visual beauty or its sense of fun - but despite leaping off the comic book page in grand style, it doesn’t quite click.

Part of that is down to a freewheeling tone that’s a bit of mish-mash, a story that's rather obvious at times (and goes on a detour in the second half that leaves the main plot adrift for a good chunk of time).

Both DeHaan and Delevigne are fine, adding some youthful zest and sharing some decent chemistry. Delevigne improves on her Suicide Squad performance and DeHaan gets to shed off his slightly more villainous reputation as the gadabout that can’t settle down but can be quite valiant.

We like the visuals, grand in their beauty and scale. The freewheeling tone causes issues tonally and structurally but adds to the film’s idiosyncratic nature - it’s happy explore the nooks and crannies of a massive world like a kid running around a toy store. The sense of adventure is endearingly old-fashioned, rooted more in the characters than outright spectacle.

It is a decent adventure, though the imagination on screen on display is what sticks in your mind more than anything else. It doesn’t come close to feeling as crazy or as weird as The Fifth Element, delivering an entertaining if flawed experience.

We weren’t supplied a Blu-ray disc, but there’s plenty of detail and clarity with the 4K equivalent - the lines and crags of Rutger Hauer’s face are impressively defined. Texture is also readily available, with the many suits and alien races having a distinct look and feel to them. It's a good test of any TV’s eye for detail.

It boasts a sleek-looking image that’s a world away from the French punk of The Fifth Element. It’s a colourful image, dazzling in its azure sky blues or rusty, sedimented reds of one alien race in particular.

The visual effects are impressive, and though there is a sense of artificiality about some of the sets it's not to the point where you’re taken out of the film. Blacks hold up very well, and complexions err towards being naturally composed - except for a few instances during the Big Market section, where the soldiers accompanying Valerian and Laureline are closer to being (deliberately) reddish.

Valerian boasts a Dolby Atmos soundtrack that's playful and enjoyable. The opening scene is relatively quiet, even with Bowie’s Space Oddity kicking things off - but there’s nice positioning of the song, which initially come out of the front speakers then switches to the rear.

There’s a lot of activity in the rear and side speakers, with the AI of Valerian’s ship opening up the soundstage as it's delivered from the left, right and rear channels. We detect a few instances of height activity too, especially in the opening sequence where ships are falling from the sky.

There are some good panning effects that are deployed whenever the characters get into a spaceship or during Valerian’s run through the space station. There’s weight and heft to the effects and bass is solidly done. Dialogue is clear and accurate, with Delevigne’s flight tones and DeHaan’s husky voice always coming across cleanly.

Valerian and the City of a Thousand Planets entertains in spite of its flaws. A more focused story would have helped matters - some may find the tone underwhelming and the characters lacking impact.

Even so, if you’re looking at Valerian 4K you can rest assured the picture is a bright, sleek and pretty effort and, if you have the set-up to take advantage of it, the Atmos track is enjoyable. Not the best of film,s but one worth watching if you’re a fan of Besson’s work.