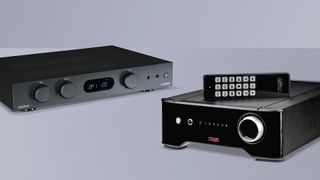 How do you decide between two terrific-sounding stereo amplifiers? The Rega Brio is a two-time Award-winner and our reigning Product of the Year for stereo amplifiers – but, with plenty of appealing features, the Audiolab 6000A is a formidable threat.

Both amplifiers cost £599, so anyone in the market for a new piece of hi-fi is spoiled for choice. But how do you make that selection? Let us walk you through the pros and cons of these two excellent amps…

Neither amp veers too far away from the sturdy metal box template: the Audiolab 6000A is a modern minimalist’s dream with clean lines and rounded corners, while the Rega Brio’s half-width design is ideal for those short on space.

Build quality on both amps is of a high standard, with responsive controls that are intuitive to use. The Rega may be compact, but its fully aluminium case is 5kg of reassuring heft. It looks smart with its swooped front-panel design that’s reminiscent of the early Brios dating back to the 1990s.

The most prominent cosmetic flourish on the Brio is the volume dial – a hollowed-out metal ring that makes the amp look a bit like a monocle-wearing dandy. It has a smooth action that’s lovely to use.

Unlike the black-only Rega, the 6000A is available in silver or black finishes. Both options look elegant thanks to an uncluttered aluminium front panel and crisp OLED display screen.

As a nod to the original 8000A amplifier from the 1980s, Audiolab has included the ability to switch between three modes: integrated, preamplifier and power amplifier configurations.

If the amplifiers don’t look too exciting on the outside, it’s because all the interesting work has happened under the hood. The revamped Brio has an updated circuit board layout and boasts two separate power supplies: the bigger for the power amplifier section, the smaller for the phono stage and preamp.

Every tweak to circuit and power supply is made to help detail resolution and keep the main signal path as clear as possible, leading to better overall sound quality. The headphone output has been carefully integrated to ensure it doesn’t interfere with the main speaker signal.

Likewise, on the 6000A, the preamp section is kept as simple as possible to maintain signal integrity, and the layout aims to keep noise interference and distortion down to a minimum. There are also independent power feeds for critical stages of the circuit, and a dedicated headphone amplifier that uses current-feedback circuitry.

Audiolab has paid special attention to the digital circuitry of the amplifier. The 6000A uses technology derived from the top-range 8300A series. It even uses the same DAC chip (ES9018) as the Award-winning Audiolab M-DAC.

So far, these two have been neck-and-neck, but this is where the splits start to appear. Rega continues its staunch analogue-only approach with the Brio, while Audiolab casts its net wider by adding digital inputs – even Bluetooth – to its list of connections.

The Brio has four line-level inputs, a pair of phono connectors, a pair of outputs for recording, and a 6.3mm headphone port. And that’s it. It’s more than adequate if you have one or two sources such as a streamer and/or a turntable. Being Rega, the moving magnet phono stage is designed to work harmoniously with the company’s brilliant line of Planar turntables.

For those wanting more choice, particularly for playback from TVs, laptops and smartphones, the versatile 6000A caters well with four digital inputs – two apiece for optical and coaxial. All are capable of playing up to 24-bit/192kHz hi-res audio files. The addition of aptX Bluetooth is definitely a bonus if you want to stream music easily and quickly from a tablet or phone, too.

Audiolab ticks the analogue boxes with three line-level inputs, a pair of moving-magnet phono inputs and a 6.3mm headphone jack. A bit of everything for everyone, then.

What it all comes down to, as Alanis Morissette once warbled, is sound quality. Both amplifiers use class A/B amplification, with a claimed power of 50W per channel into 8 ohms. But those numbers don’t tell the whole story: these two amplifiers sound wildly different.

The rhythmic Rega has superb dynamics and depth of texture, while the articulate Audiolab is wonderfully clear, refined and spacious. The new Brio takes everything we love about the Rega sound – its sense of timing, punchy dynamics, agility, subtle detail and fun – and hones them more finely. It’s clearer, more detailed and more muscular than the previous, lean-sounding Brio-R.

The new Brio sounds fuller and richer – no excitable treble here – with a gorgeous solidity running through every single note. You have only to crank up A Perfect Circle’s Pet to feel the sheer force of wailing guitars, powerful vocals and thunderous drums as if the band is physically playing in the room you’re in.

It goes loud and it’s thrilling. But the Rega hasn’t transformed into some muscle-bound heavyweight. Despite the satisfying oomph that accompanies rumbling basslines, the Brio’s nimble footing and rhythmic prowess are the true highlights.

It ducks and weaves its way around tricky compositions, tying all musical strands together in a way that’s authoritative and skilful without ever losing its sense of fun.

The sustained build up of tension in Arvo Pärt’s Fratres is a real test of the Rega’s talents: the strings are light but urgent, and the screechy texture of the bow scraping across them is tangible. The leading edges of notes are stunningly precise, and there’s a depth to the quieter moments that’s as impressive as the controlled yet powerful crescendo.

Voices are intimate and expressive, letting you gauge the true intent and emotion behind each genre of song. You can lose yourself in the way the Rega handles whatever song you throw at it, regardless of the source.

Listening to the Audiolab 6000A, we are taken with how clean and articulate it sounds. It has a gorgeous sense of clarity and ample detail that keeps you listening comfortably for hours on end.

The 6000A follows the lilting vocals and delicate tone of The Unthanks’ My Laddie Sits Ower Late Up effortlessly, gliding along the tracks with a deft touch. The edges of each note are crisp and punctual. Piano notes land with satisfying weight, bass is pulled taut, and strings are bowed with conviction – it’s a wonderfully confident performance.

But the 6000A isn’t all about refinement. Give it something with a charging rhythm, such as Amanda Palmer’s Runs In The Family with its underlying staccato beat, and the amp doesn’t pause for breath. It keeps the momentum going at a snappy pace.

The presentation is large and airy – more so than the Rega Brio – giving instruments plenty of space. You can listen to this amp loud, with very little hardness creeping in. The Audiolab’s crisp presentation comes through across analogue and digital inputs alike. The 6000A’s DAC is of a good standard, and it’s impressive to hear such a capable and composed sound at this price.

Both stereo amplifiers impress with their distinctive sonic characteristics at the same price, so it takes plenty of deliberation to choose a winner.

The Audiolab has the upper hand with the variety and breadth of connections it offers, but the Rega wears its analogue only badge with pride. Both presentations are appealing, and which one you prefer will be down to personal taste.

But there’s a rawness to the Rega Brio, an ability and willingness to dig deeper into the intent of a song that touches a nerve and tugs at our heartstrings in a way that the Audiolab – no matter how undeniably talented it is – doesn’t.

It’s a touch too poised to get tangled in with messy emotions and grittier tracks. The expressive Rega – while perhaps not as refined – doesn’t hold back, and draws us into the music every single time.

It’s what keeps us playing song after song through it. And ultimately, that’s all we want out of our hi-fi.