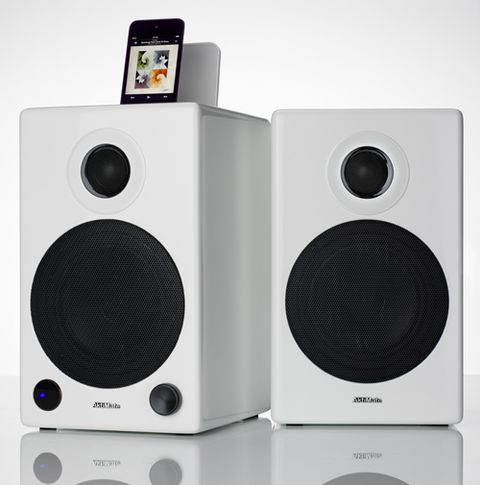 A flexible, versatile product that offers a sound traditional iPod docks can only dream of

We’ve seen a few Epoz Aktimate speakers-cum-iPod docks over the years, and we’ve been wholly impressed with every single one of them. So we were looking forward to getting our hands on these, the successors to 2009’s Aktimate Mini – the Epoz Aktimate Mini+.

There are a few key differences between the two Epoz speakers. Bluetooth connectivity now comes as standard via the included dongle; there are three line-level inputs instead of two; and you can have different inputs plugged in at once, whereas previously you could only have one.

The 1in tweeter in each Aktimate Mini+ speaker, which sits above a 5.25in woofer (now hidden behind a metal grille), has also been redesigned as a soft dome tweeter with neodymium magnet. And if that wasn’t enough, at £360, all this comes in at £40 cheaper than their predecessors too.

So what are they, exactly? The Epoz Mini+ package is made up of a pair of powered speakers, one master and one slave, capable of 40W per channel. The master speaker contains the amp, an iPod dock on the top (which can be covered when not in use) and all the inputs.

These include two sets of RCA stereo inputs for hooking the speakers up to a CD player or your TV, plus a 3.5mm jack for attaching an MP3 player or phone. There’s a stereo analogue output too, for daisy-chaining other Mini+ speakers together, or adding a subwoofer.

This makes them hugely flexible – doubling as a speaker package for your TV or CD player with the convenience of a built-in iPod dock makes them quite an attractive proposition. However, the two-speaker design won’t work for everyone and their need for careful placement (more on that later) should be a consideration too.

The speakers are available in a choice of red, black or white gloss finish, and look identical to one another, save for a volume/input dial on the front of the master speaker and blue LED light that illuminates to show your interaction is being registered. There’s also a small remote control in the box for controlling these functions from afar – it does the job, but it doesn’t have the speakers’ premium finish.

The iPod/iPhone dock is of the old 30-pin style, meaning iPhone 5 or new iPod users will have to get a Lightning adapter, hardwire into the 3.5mm jack or make use of the Bluetooth dongle instead.

Compare the sound between what the Aktimate Mini+ are capable of with even the most high-end of all-in-one iPod docks, and the difference is immediately apparent. For a start, they’re capable of true stereo sound, and far outdo their dock competition when it comes to out and out sound quality.

Dock your iPod or iPhone and the sound is solid, lively and punchy. There’s a good dynamic variation here, and a wider sound than you’ll get out of any dock avt this price range. While docks struggle to shake their physical form when it comes spreading the sound away from a single point, the Mini+ speakers place you right in the middle of the music making it more difficult to pinpoint where the music is originating from.

Playing Tensnake’s Coma Cat lets the Aktimates show off their great rhythmic ability, delivering the electronic bass line with vigour and accuracy. It reaches deeper into the bass than we’re used to hearing in this type of product too, while the midrange and treble keep a sweetness to them that means they can also sound delicate and light on their feet when needed.

The Mini+ speakers are a great house party companion and go louder than most docks we’ve heard – but that doesn’t mean you should go over the top. They’ll easily fill a fair-sized room with detailed sound, but push them to their limits and they’ll start to lose the composition they had lower down. It’s best to keep them at a reasonable level to get the most from them.

We did find the Aktimate Mini+ speakers required some careful placement to sound their best. They definitely need to sit around 6-12in away from a rear wall, and preferably on stands. Sit them on a desk and the bass can sound slightly boomy for our liking, whereas too far from a wall they can start to sound a little bright. It’s certainly worth playing around with their placement to find what works best for your room.

Bluetooth works well, pairing quickly and without issue. It would have been nice to see aptX Bluetooth on board, though –as it is you won’t get the best Bluetooth sound available. There is an audible drop in quality from the docked sound – it’s less solid and slightly brighter – but that goes hand in hand with Bluetooth streaming, and is currently the price to be paid for wireless streaming convenience.

We’re as taken with the Mini+ speakers as we have been with the rest of Epoz’s Aktimate range. While the lack of a Lightning connector might be something of an oversight, and the design might be tricky for some rooms, if it’s something you can make work it’s hard to see why someone would opt for an all-in-one speaker dock over the Mini+ speakers.

Delivering a great stereo sound and the flexibility to work with analogue sources as well as digital, we’re struggling to see how you could spend your £360 any better.