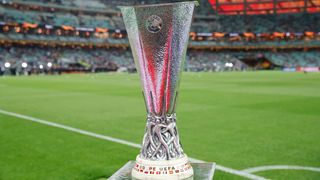 There is no club with a better record in the Europa League Final than Sevilla. The Andalusians have won all five of the finals they’ve played in but if anyone can take them down it's Inter with their hat-trick of UEFA Cups from the 90s. Make sure you know how to watch the 2020 Europa League Final free live stream wherever you are. It’s going to be a cracker.

BT Sport is offering all UK viewers a 2020 Europa League Final free live stream through the BT Sport YouTube channel, the BT Sport website and BT Sport app. UK citizens away from home will need to sign up to a VPN to watch Sevilla vs Inter for free from abroad. The referee for Sevilla vs Inter will be Danny Makkelie of the Netherlands.

The 2020 Europa League Final is arguably one of the tastiest in years and picking a favourite is next to impossible. On the one hand is a club who has been here and done it so many times that one simply can't bet against them. Sevilla took out a very strong Manchester United team in the semis, a stubborn Wolves in the quarters and an ever-dangerous Roma in the Round of 16.

The brilliant Monchi is back in his role as sporting director and the squad is as solid as ever with veteran talent like Jesus Navas, Ever Banega and Luuk de Jong, plus dangerous younger performers like defenders Sergio Reguilon and Diego Carlos, Lucas Ocampos (a player now linked for a move to Everton), Youssef En-Nesyri and Munir.

And if it's names you want, then the other half of this final is stacked with them. From the coach down, Inter Milan have a recently assembled embarrassment of riches that's sure to do some serious damage to Juventus's strangle hold on Serie A next season. They're even rumoured to be plotting a move for Leo Messi to complete a sudden rise from their decade in relative slumber.

Antonio Conte has deployed Lukaku and Lautaro Martinez to the damage again. According to two-goal semi-final hero Martinez, Inter are ready for great things.

The 2020 Europa League Final of Sevilla vs Inter Milan takes place at the RheinEnergieStadion in Cologne, home of FC Koln. Kick-off is at 8pm BST on Friday 21st August. Read on to find out how you can watch a Europa League Final free live stream wherever you are in the world.

We'll look at the TV and live stream options for UK and USA-based fans below, but even if you have subscribed to the relevant services, you won't be able to use them when outside your own country. The service will know your location based on your IP address, and will automatically block your access.

Watch the Europa League Final for free in the UK

Rights to show the UEFA Europa League Final in the UK belong to BT Sport and the company has kindly made Sevilla vs Inter a free-to-air game for all UK citizens, whether they are BT customers or not.

Simply head over to the BT Sport YouTube channel, the BT Sport website or use the BT Sport app on a smart TV or mobile device for a free Europa League Final live stream. UK citizens away from home will need to sign up to a VPN to watch Sevilla vs Inter for free from abroad.

BT Sport customers can tune in as usual on BT Sport 1 and BT Sport Extra 1 for HD coverage of the game.

Likewise, Virgin Media customers can head straight to Channel 100 to enjoy the game in HD or use the Virgin TV Go app on their mobile device.

BT Sport comes in 4K HDR, beamed at 50fps on BT Sport Ultimate, channel 433 where it will show the 2020 Europa League Final. If you're hooked up specifically on the BT TV platform then it's also available in with Dolby Atmos sound.

BT Sport Ultimate is not available on the Sky TV platform but anyone with an Xbox, PlayStation, Apple TV or a Samsung TV can watch in 4K HDR using the BT Sport app.

Virgin Media customers with the V6 set-top box can also enjoy the Europa League Final in 4K. Head to the BT Sport Ultimate on channel 531.

UEFA Europa League fans in the States are lucky enough to be able to watch some of the European football action free on Spanish language network Univision. The rest, you’ll have to pay for and the rights are shared out between Univision Deportes Network and CBS All Access.

All times in BST.